Far Cry Primal is more of the same old good stuff – we reviewed it a few weeks ago, and we loved every minute of it. It isn’t really hard, but Far Cry Primal tips and tricks are always welcome in my book. We also have a Far Cry Primal trophies and achievements guide set up if you are a completionist.

Far Cry Primal was released on the 23rd of February for PlayStation 4 and Xbox One, and on the 1st of March for PC. If you haven’t bought it yet, we suggest you take a look at our recommend retailers GreenManGaming, Humble Bundle, Steam, and Amazon; and better yet, go to our Game Deals and Promo Codes page to find discounted video-games. 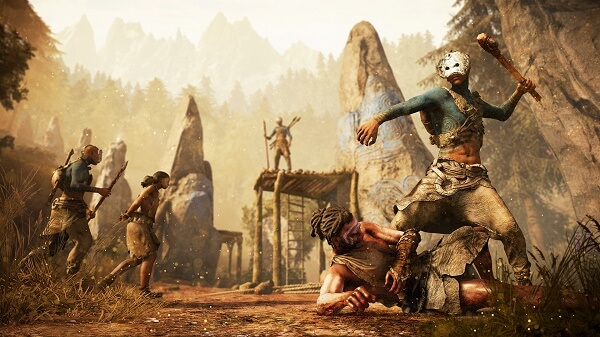 Far Cry Primal is set in the stone age and this limits your choice of weapons quite dramatically. Primarily, you’ll be using the club to bash your enemies – it can also be thrown to effectively stun foes, but your capacity is highly limited so I would be careful if I were you when I choose to launch it.

Another powerful melee weapon is the spear, and you can use it to jab at incoming, or defending foes. It deals loads more damage if you throw it, but you’ll have to be super accurate as you can carry only two at a time.

Your main ranged weapon is the bow and arrow, and at the beginning of the game, you should always aim to land headshots to instantly kill enemies and animals. Until you get a better bow, you’ll have to take into consideration how the arrow drops over long distances. 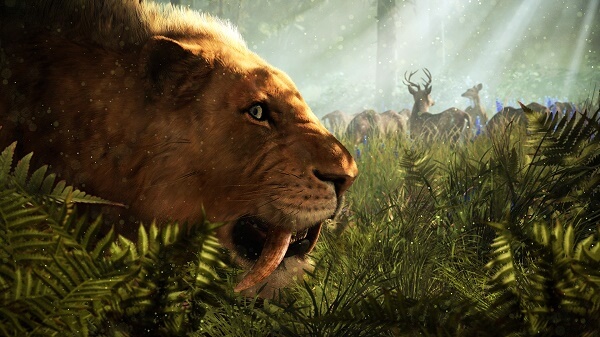 There a plethora of predators in Primal that want nothing more than to rip you to shreds and feast on your carcass. You need to pay attention when you’re travelling as animals can pounce from, basically, anywhere and everywhere.

Constantly look at the red markers that appear on your mini-map, but it’s way easier to avoid hungry wolves and bears if you listen to the sound of approaching footsteps. You can’t outrun animals – except for crocodiles;  so it’s better to get to higher ground. Try climbing on top of rocks, and even on fallen trees so you can heal yourself and plan a strategy to either kill the bugger or successfully escape. You can also jump into water and get rid of the pesky predator that has been chasing you, but be sure that it can’t swim – obviously, crocodiles are natural born swimmers, and killers, but I didn’t expect bears to follow me, paddling their grotesque paws.