This post is meant to make you recall a great South Park episode. The production in question aired 8 years ago, on October 4, 2006, called Make Love, Not Warcraft. The South Park World of Warcraft episode and gamer humor are the topic of today’s post.

This episode, which is the eighth episode of the tenth season of the animated television series and the 147th episode overall, won a 2007 Emmy Award in the category of “Outstanding Animated Program (for programming less than one hour)”. This is the show’s second overall Emmy Award. 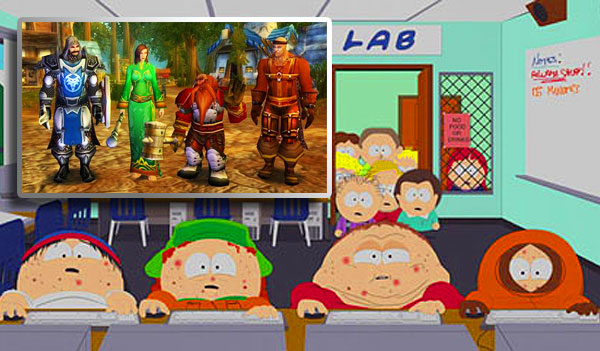 Cartman, Kyle, Stan, and Kenny Play WoW with a Single Purpose in Mind

Here is the plot in a nutshell. Cartman, Kyle, Stan, and Kenny enjoy playing the popular massively multiplayer online role-playing game (MMORPG) World of Warcraft. When a high-level player goes around killing other players in the game, they start playing WoW every day to try to stop him.

The South Park World of Warcraft episode continues with the boys playing the game for 21 hours a day for 2 months. They kill low-level boars in the game’s forests to gain experience points (in a montage set to Paul Stanley’s “Live to Win”) while hiding from the griefer.

In the process, the boys become lazy, long-haired, overweight, and acne-ridden. During this period, they also consume mainly Hot Pockets, Rockstar energy drinks, and Ramen noodles. Eventually, they also develop large internet-born vocabularies, using terms such as “über” and “pwned” and “r-tard” in daily conversation.

The boys’ characters grow so quickly that the Blizzard executives realize that the boys have no personal lives at all. They want to take advantage of this group to stop the griefer. The company knows this player will be the end Warcraft’s popularity if he is not stopped. However, they calculate that even with the amazing rise in their levels, the boys still have a 90% chance of failure.

The Boys Receive the Greatest Sword in WoW

Determined to help the boys slay the evil griefer, executives decide to give the boys the Sword of a Thousand Truths. The South Park World of Warcraft episodedeemed that this is a weapon so powerful that it was removed from the game. It was stored on a 1 GB USB flash drive as “Salzman from Accounting” foretold that it would eventually be put to use at a time of great need.

Unaware of the plan however, the boys have already initiated a bold move. This inception turned into a seventeen-hour battle against the griefer. The executives predict to be unsuccessful without the aid of the powerful sword. The executives arrive at Stan’s house with the flash drive, unaware that the boys are actually at Cartman’s house.

Randy tells the executives that although he is a “n00b”, he can log in with the sword and give it to the boys’ characters online. The executives eventually, though reluctantly, agree with the plan but not without stating at first that: “We can’t trust the Sword of a Thousand Truths to a n00b!”

In the end, Randy logs onto a Warcraft demo at a Best Buy. He then gives gives Stan the weapon to save South Park World of Warcraft. Unfortunately, Randy’s character is mortally wounded by the griefer in the process. Angered, Stan attacks the griefer with the sword, draining away all the griefer’s mana and taking down his shield and armor spells in the process.

The Villain Is Defeated, and the Boys Become Legendary Heroes

Kyle and Kenny attack, knocking the griefer to his knees. Cartman approaches him, saying: “looks like you’re about to get pwned”, and proceeds to smash the griefer’s head with a hammer.

The griefer back home is stunned that his character has died. Numerous World of Warcraft players come out of hiding and celebrate the griefer’s demise, praising the boys as heroes. Stan asks what they will do next, prompting Cartman to respond: “What do you mean? Now we can finally play the game”, and they continue to play in the same way.

Great Quotes from the Make Love, Not Warcraft Episode

The “Make Love, Not Warcraft” episode has gone down in the gaming history. It is full of references that together created a bridge between two much loved worlds, South Park World of Warcraft. This fast recall of the episode can bring you up to date with the moment these two phenomena of the digital world collided.

Before you go, leave your comment below on how much this South Park episode stroke a chord with you. We’d love to hear from you!