To most people, Bioshock 2 seemed like an unnecessary sequel. Apparently, 2K Games wasn’t content with that and wanted you to have another submarine adventure whether you liked it or not! And you know what? It ain’t half bad. 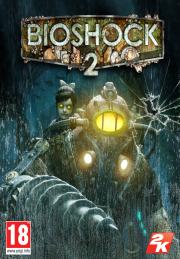 The initial announcement of Bioshock 2 was that it was going to be a prequel and that you would be roaming the intricate art deco halls of Rapture before the ensuing chaos of the Bioshock we already know and love. I’ll admit I was excited. Though, the more and more I learned, the less enthralled I became. When the news broke that the game would actually take place eight years after the fall of Rapture, I was a little irked. Instead of the promise of seeing the underwater city in its most pristine form, it would be in its familiar dilapidated state of disarray. I let this pass considering nine out of ten sequels take place in more or less the same settings. What’s one more, right? Then there was the reveal that you would be playing as a prototype Big Daddy. This was when I began to feel my apathy settle in. Why, of all of all things, would I want to play as one of the few enemies that I’ve actually feared in gaming? In the first Bioshock, hearing the lumbering footsteps of a nearing Big Daddy or the shrill, two-toned voices of the palid, yellow-eyed Little Sisters conditioned me in a manner that I haven’t experienced since Spielberg’s Jaws. When the daunting notes of the iconic tuba played, my body tensed in preparation for the man eating fish and the carnage that would follow. The Big Daddies had a similar effect on me. So, why would I want to eradicate that tension by becoming the same beast? Alas, I had no choice. So I sucked it up and readied myself to give Bioshock 2 the benefit of the doubt. 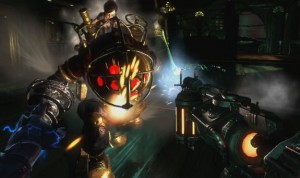 The game immediately opens to a cutscene of the pre-uprising Rapture of 1958 as you, the Big Daddy prototype named Subject Delta, follow your little sister as she harvests ADAM (A form of stem cell found in sea slugs that are used to create the super powers of rapture known as Plasmids). Your time with your Little Sister is soon cut short however, when you realize that she is Eleanor Lamb, the daughter of Rapture’s head psychologist and Bioshock 2‘s main antagonist, Sofia Lamb. Not approving of her daughter’s symbiotic relationship with Subject Delta, Sofia forces the Big Daddy to commit suicide by using a mind controlling Plasmid. Now, fast forward ten years and we find Subject Delta is revived, pissed and ready to find his Little Sister who is being held hostage somewhere in the depths of Rapture’s pandemonium.

Honestly, the story of the game didn’t do much for me. Nothing about it was extremely compelling or really made me feel like I needed to carry out my tasks. Lamb’s intentions to create a “collective mind” among humans never really struck me as a threat. To me, Lamb came off as a two-dimensional, cop-out antithesis to Andrew Ryan’s Ayn Rand-like Objectivist beliefs rather than a fresh or unique villain. If anything, 2K Marin seemed a little more focused on Bioshock 2‘s “Father/Daughter” relationship of Delta and Eleanor as a focal plot device. Regardless, none of it feels like it contains the verisimilitude that I’m sure 2K Marin hoped for. It’s good storytelling, just not quite to the magnitude of its predecessor. Furthermore, most of the side stories feel somewhat lost in the overall ether of Bioshock 2 and are vaguely forgettable. Except for two.

Without giving too much away, I have to tip my hat to 2K Marin for one specific choice in the latter half of the game that really left an impression on me in a way that few games do. Moral choices have become so blasé in gaming because of their black and white, right and wrong nature, but every once in a while you get shades of ambiguous, uncomfortable grey that make the mechanic feel like new again. The second instance (another which I won’t divulge to much about), was a wonderful look into the lives of the Little Sisters and their perception of the world around them. Aside from these specific moments, most of my experience with Bioshock 2 was just about sightseeing Rapture again and how much damage I could do to Splicers in the process. 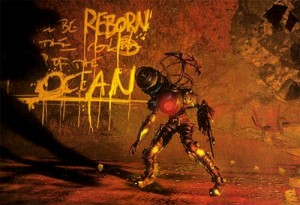 There are a few minor tweaks (like video recording for research rather than snapshots) brought to the table in Bioshock 2, but the most obvious, and probably most welcome, is the ability to dual wield Plasmids and weapons simultaneously. In Bioshock 1, protagonist Jack could only harness one line of defense at any given time, which made for a lot of stopping and switching with the inventory dial. It didn’t necessarily break the pacing of the game, but it didn’t help it either. You’ll still have to do this to pick adequate weapon combinations relative to the enemy you are up against, but having the ability to use both at the same time automatically keeps you moving and makes you feel more powerful. As playing as a Big Daddy should feel.

If I had one problem with the first Bioshock, it would have been the games ending. If I had two problems with Bioshock, it would have been the repetition. As much as I love running around turning Splicers into swiss cheese with super powers and Tommy guns, Bioshock’s mechanics became too habitual too fast. Apparently, it’s in the programmed (and enhanced) genetics of the Bioshock family. You’ll find yourself constantly stuck in cycles of entering rooms and killing off waves of Splicers and a Big Daddy or two. There are a few new enemies in the line-up to help keep things fresh, but nothing too fantastic. Even the Big Sisters, while initially entertaining become stale fast. They are agile, bounty hunter-like, evil, adult Little Sisters that come after you when you have dealt with every actual Little Sister in the current level. Because of the game of cat and mouse you play with one of the Big Sisters in the early stages of the game, you learn to fear them. However, once you’ve taken one or two out, you’ll realize that they are more of a nuisance than anything. As stated, they only come after you once you’ve dealt with the Little Sisters. So, for the most part, you can bypass a fair amount of your encounters with them. 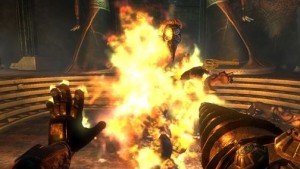 Similar to Bioshock, in Bioshock 2, after besting one of your large patriarchal brethren, you have two options to deal with their Little Sister’s. However, instead of “saving” them, you adopt them as your own. The benefit of doing this is in the inherent nature of the little tyke on your shoulder. Spread throughout the various wings of Rapture are dead Splicers teeming with delicious ADAM and when you happen upon one of these suckers, you’ll have to fight off waves of enemies and protect your pint-size partner as she drains the juice. The first few times I participated in this event I found them fun as I outfitted the makeshift arena with traps in preparation for the onslaught of Rapture’s insane residents. Like the rest of Bioshock 2‘s been-there-done-that feeling, after doing it so many times, my excitement eventually waned into a procedural lethargy. That’s if you adopt Little Sisters, though. If it sounds like too much trouble, just harvest those little twerps and take their ADAM and run. Whether or not you find these horde-fighting portions fantastic or boring (or if the former feeling becomes the latter), you’ll undoubtedly love the weapons that are at your disposal.

One of the perks of being a brute at the top of Rapture’s food chain is being able to tote around heavy artillery. The first of which is the iconic Big Daddy’s drill. Throughout portions of the game, I honestly forgot that I was a Big Daddy. Maybe it’s because I never really felt like Subject Delta had the heft that he needed to make me believe he was one. For being such a genetically enhanced perversion of a human, Delta moves too swiftly and fluidly. But there are times when I did remember he was a Big Daddy, especially once you unlock the powerful Drill Dash move. On it’s own, the drill doesn’t feel exceptional because there is still a relative lack of weight to the melee jabs and the thrust of Delta’s arm. More than likely you’ll keep your distance from enemies and stick to ranged weapons anyways. 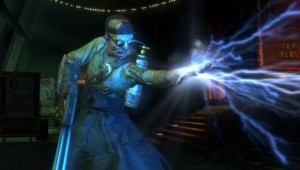 Outside of the drill, you have a pretty familiar array of shotguns, launchers, and machine gun. There are a few new additions, such as the hack tool which allows you to, well, hack sentry drones and locked doors from a distance, but the best addition has to be the spear gun. Taking aim down the scope of this harpoon flinging firearm is as devastating as it is disturbing. With the right upgrades, a direct hit with a spear will carry an enemy off their feet and fastening them to a wall. It’s pretty awesome. And for a real treat, do yourself a favor and find some rocket spears. Trust me, you’ll ant to see it.

With Bioshock 2, I find myself at somewhat of a crossroad. On one hand, the game claiming to be the sequel to one of the best experiences this hardware generation falls kind of flat in comparison. On the other, you have a competent shooter that does a decent job of outshining its former as far as trigger happy game mechanics go. Anyway you slice it, the game is pretty solid and 2K Marin did a great job of capturing the essence and ambiance of Rapture. It may not be quite as exciting as your first time to the underwater dystopia, but if you can deal with a little bit of repetition, Bioshock 2 definitely makes the second trip a good one.