Let’s do a little experiment.  Tell me what comes to mind after each of the following.  Infinity Ward.  Let me guess, Call of Duty?  Okay, let’s try a developer.  Game Freak!  Let me guess again…Pokemon?  Okay one more.  Epic Games.  Now chances are, most if not all of you immediately thought “Gears of War”.  Well, in Epic Games’ case, their latest game launch actually stepped away from Gears of War and begun the era of an all new IP…Bulletstorm.  Until a couple of weeks before Bulletstorm’s release, I really didn’t know too much about it.  I had read the featured article in GameInformer about it, and had stumbled across little bits of news here and there, but based off the lack of publicity and overall hype for it, it was a game I almost let slip from my fingertips in terms of review.  Now that I’ve got my hands on it and played through the entire single-player campaign, am I glad I gave it a whirl, or should I have just let it slip away.  Find out in our Bulletstorm Review.

*Please note this review is based solely on single-player experience.  I was unable to play multiplayer for technical reasons. 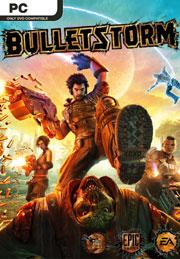 Buy BulletStorm for PC at GamersGate!

Personally, being a fan of sci-fi fantasy, I found BulletStorm’s overall premise to be awesome.  Far into the future–when space-faring is reality–a StarCraft II terran style Civil War rages on.  Our main character, Grayson Hunt, is a former Confederate operative turned pirate.  During a random pirating escapade, Grayson finds himself with the perfect opportunity to strike at the heart of the Confederacy: their prized warship and his former squad commander.  In a drunken stupor, Grayson puts his ship on cruise control right towards the warship, and finds himself and his crew waking up on the planet of Stygia.  It’s Grayson’s responsibility to get the survivors off the planet, and while he’s at it…maybe get the revenge against his commander that he so eagerly craves. 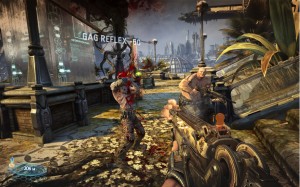 Perhaps the most unique and in my opinion fun aspect of BulletStorm is the skill kills.  Early in the game Grayson comes across a Confederate weapon called a Leash.  The Leash has semi-artificial intelligence among other things.  Using this leash, you can grab enemies and hurl them into the air in slow motion.  Then, based on how you opt to kill said enemy, the AI in the leash will assign a point value to your skill kill.  Alongside your guns and leash, your boot will also place an enemy in slow motion after kicking them.  Skill kills include “Voodoo Doll”, where you leash or kick an enemy into something spiky like a broken fence.  Another is “Graffiti” which is obtained by kicking someone up against the wall then immediately kicking them again so they splatter into the wall.  There’s even basic ones like “Gag Reflex” which is obtained by simply shooting the enemy in the throat to death.  Throughout the game are Confederate supply pods that you can “hack” into using your leash and gain access to upgrades and ammunition.  This system not only makes “killing in style” fun, but rewards you for it.  Something that is not often done well. 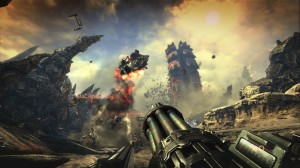 Graphically, BulletStorm is impressive.  Exploring Stygia is a consistently breathtaking experience, from the civilizations to the lush landscapes and much more.  Just when you think the game has been pushed to its limits, the next chapter brings something twice as awesome right to your screen.  Everything about the visuals is near perfection in my book.  The particle effects of blood splattering and debris crumbling around you (as seen in some of these screenshots) look realistic right up to the speck of dust.  I’m not sure how much BulletStorm was bragged about in terms of graphics, but it is literally one of the best looking games I’ve played.  I’ve got a pretty beastly PC (you can see the specs under my profile) and the game looks as high-definition as any in ever aspect, and was completely lag-free.  If you’re like me and often find yourself stopping in the middle of a game to simply look around and enjoy every detail of your surroundings, BulletStorm certainly won’t let you down.  Nothing in the world ever seems half-assed or cheaply put together.  When I see a huge building in the distance, I feel as though if I could somehow get there–which I never rule out as a possibility–I could explore it.

Throughout the game the connections between characters and the world of Stygia (and the overall storyline, for the matter) strengthen more and more.  The story progresses very consistently and at times very intensely as well.  There’s never a dull moment in the story, and I almost always would find myself excited to see just what would happen next.  Every character over the course of the game have their own little arc that in some way shape or form branch back to the overall theme and direction of the story, and the engrossing story matched with the immersive world is guaranteed to keep any gamer engaged.  I will admit, however, that I have one gripe with the story.  In fact, this is perhaps my only gripe at all.  The ending.  Bulletstorm is definitely setup to allow a sequel–assuming the game sells well–and while I’m looking forward to more insane skill kills and another beautiful world to traverse as space pirate Grayson, I would’ve much rather have some sort of ending to this game.  There really isn’t one.  I guess if I had to pick another gripe–though it’s not really a gripe but moreso a request–it would be a co-op campaign.  This game would simply be amazing with co-op gameplay. 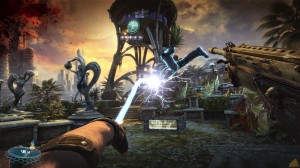 So the real question: is BulletStorm worth buying?  Yes.  This game has some of the best graphics to date and it’s not just pretty wrapping paper like some games out there.  The gameplay is engaging and refreshing and as someone who has become somewhat bored with the shooter genre lately, BulletStorm has been like a breath of fresh air to me.  Even though the game is only about 6 or 7 hours long–keep in mind there is multiplayer game modes as well as a time-trial style mode–it is without a doubt one of the best shooters I’ve ever experienced, and perhaps one of the best games period.  Though this may be bold, I say watch out Gears of War.  I know the series is ending with the 3rd, and honestly, I’m okay with that knowing BulletStorm is still alive.  If you like shooters or have ever wanted to decimate enemies in a way not even heard of (and get scored and earn points for it!) you owe it to yourself to pick up one of the best shooters ever made.  Grayson Hunt, you’re my hero.