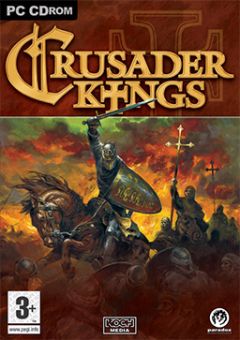 Even though the above boxart may be foreign to some of you, it’s actually the Holy Grail to others.  Crusader Kings was a strategy game by Paradox Interactive that came out back in 2004.  Crusader Kings focused mainly on building a dynasty as opposed to a country, and had RPG and simulation features in it.  The game was reliant on macro-management and required far more planning than your typical real-time strategy game.

“The community’s outspoken demand for CK2 has been nothing short of incredible,” said Fredrik Wester, CEO of Paradox Interactive. “Since the game was released in 2004, every single time we’ve announced a new title we’ve been barraged with questions as to when we’d finally do a Crusader Kings sequel. So it’s with great enthusiasm that we are formally announcing that we’ve started development on the game.”

“Crusader Kings character system is what made it stand apart from any other game released on the market. With this sequel, we are committed to offering even more depth to the characters, making them feel truly alive with agendas and plots of their own” said Johan Andersson, Head of Development at Paradox Interactive.

In Crusader Kings 2, a grand-strategy title, players will get to control one of the great Christian Dynasties of the West, attempt to conquer all of Europe and liberate the Holy Land.  It is expected to be for PC only out around Q1 2012.