Set in the world of the Majesty series, Most Wanted Entertainment brings a new twist to the increasingly popular ‘Tower Defense’ genre with Defenders of Ardania. There’s more to it than the traditional concept of placing various towers to defend your base from waves of enemies.

This time, you’re given the chance to send your own army against the opposition. Unfortunately, a new twist does not make up for the various flaws that keep this game from being anything but enjoyable.

While playing Defenders of Ardania’s incredibly short campaign, I found very little enjoyment from any of the 18 levels it had to offer. Most missions put you up against a single opponent. Occasionally, up to four different opponents would raise against you.

The game creates the illusion of strategy with its various unit and tower types. However, most of the battles come down to spamming one specific unit for the five to ten-minute long mission. By keeping up this strategy, you’ll eventually destroy the enemy base.

Despite there being a variety of towers and offensive units, there never seems to be any need for strategic placement or planning.

Instead, you simply hope you aren’t overwhelmed and can upgrade your base with the various tower upgrades. You can also turn to “hero” units–which are only slightly stronger than your basic units–and economical upgrades before the enemy completes theirs.

Building units, towers or using magic abilities costs gold. This currency regenerates over time. In most cases, I found myself starved for gold at the beginning of the battle while enemy units flood the screen. However, near the end, I have an abundance of gold with little to no means of spending it all.

This presents a quick defeat in some scenarios. However, you will find yourself unable to defend your property before the enemy units destroy your base. Other times, they just walk past any towers you manage to have erected with little effort. 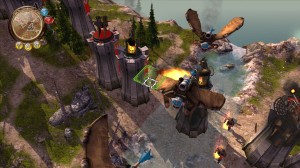 Occasionally, you can win by spamming one unit the entire time without doing anything else. There is an unfortunate sense of imbalance here. You will experience either too much or too little challenge in any given matchup.

I myself was forced to stop one level away from the end due to being incredibly overwhelmed by three enemies at once. They appeared to be in the possession of unlimited resources. Six tries later, I knew victory was far off. It seemed it depended more on luck than any skillful placement.

Later on, it appeared that I wasn’t alone. A quick look at the statistics on Steam showed that only 4.6% of users actually finished the campaign. The game plays out like a giant match of tug-of-war with little influence on each sides’ strength. This makes it more of a game of random numbers rather than strategy. 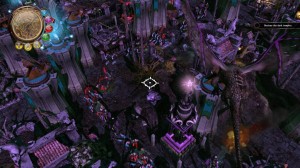 The story itself is full of quirky humor you would likely find in a Saturday morning cartoon. Ardania’s background hardly ever takes itself seriously. The various plot points and your ongoing war with the undead all seem somewhat cliché and unoriginal.

I did enjoy the tale a little bit. On the other hand, the atrocious voice that hosts the game had me grinding my teeth in agony. Aside from the painful voice acting, you are also forced to sit and wait through each dialogue exchange (multiple times if you are defeated). I found this to be incredibly grueling. It literally made me want to turn the sound off.

I can understand the attraction of a lighthearted nature in a game. However, let’s keep in mind that this game comes with a T rating. Therefore, I would expect a little more than just an annoying dwarf constantly talking about drinking beer to earn that rating.

Luckily, you can turn separate volume channels up or down to deal with this. For instance, the subtitles are more than enough to get the point across. The music and sound effects are great and enjoyable. On the other hand, the soundtrack wasn’t too diverse. 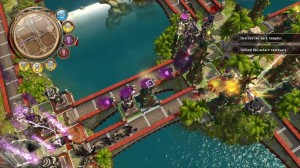 The Design of the Game

Graphically, Defenders of Ardania provides more than what you would expect from a low-cost title. They do a great job and create some strong points such as the water effects. Spell effects are lacking yet the towers attack animations are unique and at time entertaining.

Character models are basic but rich enough in details to give them a distinctive character, all without being a distraction. As for environments, they are occasionally recycled yet at times can be interesting to look around at, depending on the level. 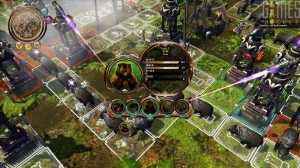 A Look at the Multiplayer Feature

This game is supposed to be heavily focused on the multiplayer portion. However, while doing this review, I was unable to find anyone to play online with.

The lack of options or any real excitement seems to have driven away all 200 of the leader-board tracked Steam players. Over the course of nine hours, the game failed to find a single match.

It’s supposed to be able to mingle with the eventual PlayStation Network version, but I strongly doubt that this trick will help populate the barren lobby. The traditional free-for-all, team-based, and co-operative modes are here but provide nothing new.

If the back and forth battles of the single player experience are any indication as to how Player versus Player combat would play out, I can see why no one cares to play it anymore.  I’d imagine the Xbox Live Arcade version of the game has a more active community. That’s based on its focus around multiplayer interactivity and the typical features of an XBLA title. 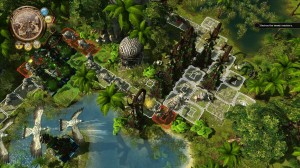 What could have been a fun new twist on traditional tower defense ends up falling short. More so, it acts as a tedious and non-enjoyable experience with no multiplayer support.

Perhaps a sequel could take the few great points and lessons from the title and turn them into a truly innovative experience. However, that seems unlikely at the moment.

With a $15 price tag and what amounts to a few hours of boredom and irritation, it’s hard to recommend this game to anyone including strategy and tower defense fans.  If you still insist on picking up Defenders of Ardania, I’d recommend doing so on its native iPad platform.