I hate it when things don’t go according to plan. My feelings towards Frozen Synapse are similar to that of when you plan to hang out with someone and one hour before they say, “Nah, can’t do it today.” Playing Frozen Synapse gives you that same feeling except with guns and neon colors.

In the fictional city of Markov Geist, there exists two realities: the real and the shape. Humans exist in the real reality while shapeforms and vatforms live in the shape reality. The shape reality is supposedly a network that is half organic and half digital. Vatforms are faceless duds that do shooting and movement for you, while shapeforms are easily described as advanced artificial intelligence.  Enyo, a finance corporation, has complete control over the shape reality since its merger with the company that created the shape network, Nomad. Not only that, they also control the government of Markov Geist. As soon as they start touching territories, splinter factions start appearing and fighting  against Enyo:Nomad. 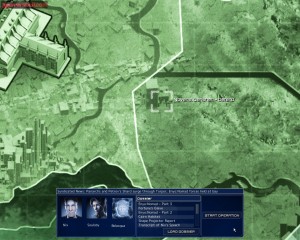 Instead of fighting with humans, the player fights with vatforms through the shape reality. Vatforms know only how to walk and shoot; for everything else, you have to tell them to do it. They are categorized by what weapons they carry rather than their experience and knowledge because, well, they are brainless soldiers who do what you tell them to do. Therefore, I shall now call vatforms by their functions because that’s all they’re worth and it’s much easier to say. 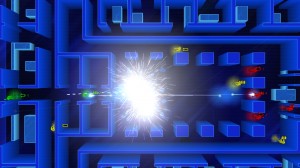 Mow that that’s out of the way, I can start explaining what the game is like. Since vatforms are dull shells of human forms, you have to tell them where to walk, shoot, duck, and do their business… maybe.

It’s your job to come up with a plan to complete each objective whether it be capturing a room, defending a room, eliminating all hostiles, escorting V.I.P.s, or picking up pieces of data. The whole game is turn-based strategy, so your opponent’s moves are unpredictable. Frozen Synapse adds actual strategic thinking rather than quick reflexes in strategy games. Most strategy games involve gathering resources and spending them wisely. After that, it’s all about how fast you can upgrade units and knowing each units’ strengths and weaknesses. Frozen Synapse likes to tell you that those reflexes are useless. Making plans for your soldiers forces you to think out every possibility and how to counter each one. 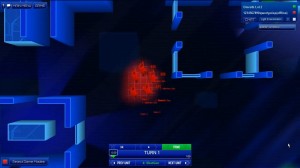 Personally, I suck at Frozen Synapse. Every plan I make seems to crash and burn. I guess that just says that the AI is challenging and unpredictable. Not only that, but the maps are randomly generated so that you’ll never see the same arena ever again. That also means that you can’t recycle old plans. It does get frustrating because every time you make a plan you might think to yourself, “It’s going to work this time. I don’t think the AI will suspect this. Ha ha ha!” Then you’ll end your turn only to have the AI wipe the floor with your units. 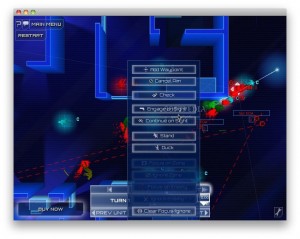 The game gets very complicated with how and when vatforms shoot. There are many ways to move a vatform through a level, each with its own tactical purpose. Each vatform has its own strategic advantages, such as a shotgun will engage other units quicker than a sniper rifle or machine gun will. So of course, you’ll want to put your shotgun up front, your machine gun in the middle and your snipers in the rear. The only problem with that is the AI getting into their positions. The enemy AI usually finds a way to out flank whatever you were going to do. However, it becomes easy to predict what the AI was going to do. 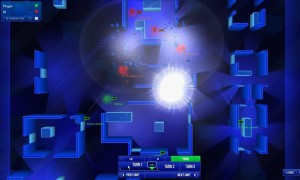 Later on in the game, the AI says, “Think you know me? Bah! You don’t.” Then the game turns on fog of war which makes the game a hundred times harder. It makes the game unreasonably harder and more challenging. I don’t know when fog of war in such an enclosed space was a good idea because it doesn’t work at all. Basically, the only effective units in fog of war are shotguns and rockets with shotguns for the close range and rockets for clearing areas where enemies might be camping. The parts when fog of war is active turns the normal strategic planning into a guessing game. 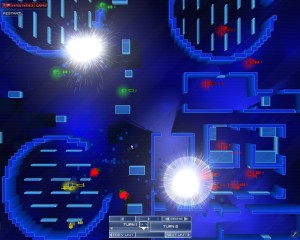 Frozen Synapse is a bundle of psychological warfare, anticipation, and competition. Multiplayer takes sometimes days to finish, but doesn’t take much time out of your day. I’d say it’s a great game to play if you’re getting tired of chess and want to see some more action. The game’s pacing is very user-friendly and informative with updates on your games by email. It’s also very easy to show how good you are compared to other players because of the Elo rating system. On the singleplayer side, the AI is incredibly good at what it does. It continues to outsmart me and adapts easily to whatever move you make. The story of the game is very interesting as well as the concept. There are up to 52 missions to complete in the campaign which can become fairly lengthy when it takes at least three tries to complete a level. Each mission requires a different plan and strategy to complete it. There’s no upgrades or resource-gathering. None of that. It’s all strict tactical strategy against your opponent. You anticipate your opponent’s moves and you try to counter every possibility. Frozen Synapse is a game that combines tactics with turn-based strategy and does it well.