Grotesque Tactics: Evil Heroes is a game. Yup… It sure is. 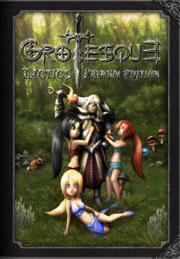 As I installed Grotesque Tactics: Evil Heroes, I did a little prep work to find out what I was getting into. Info around the web was scarce and the bulk of what I could find were bullet point lists from press releases. Developer, Silent Dreams, compared Grotesque Tactics: Evil Heroes, a virtually unknown title, to the merits of other tactical role playing big-leaguers, like Fire Emblem and Final Fantasy Tactics. That’s pretty bold. Now, this isn’t to say that an upstart developer can’t make a surprise hit, but when the grandiose statements are accompanied by screenshots with less visual flair than most free-to-play, in-browser games, I take the words with a grain of salt.  But, I wasn’t going to judge a book by its cover, I’ve learned my lesson with that. So, there I was, finishing the install and starting Grotesque Tactics: Evil Heroes…

“Grotesque” is pretty much the best way to describe Grotesque Tactics: Evil Heroes. It’s ugly. As soon as the game kicks off, an introduction sequence starts that shows off hand drawn visuals that have the quality of notebook sketches of a bored middle school student. And the in game models are equally as poor. Like I stated, the character models are worse than what you would expect from a free-to-play MMO. There is really no better way to describe it than just awful. The only relatively decent part of the game’s visual representation (or even of the entire game for that matter) are some of the environments. But even at their best, I can’t say I was ever actually impressed by them. 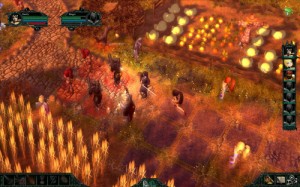 Silent Dreams describes Grotesque Tactics: Evil heroes as, and I quote from their website, an “ironic storyline with a deep atmosphere, which RPG fans will be signing ballads of for the next thousands of years.” I know it’s supposed to be a hyperbole, but even the core statement of having irony and story is a fallacy. I understand what the game was going for by poking fun at the RPG genre. The problem lays in that the humor is so intermittent (not to mention offensive), that it feels like it was originally intended to be taken seriously and the painfully unfunny “comedy” was shoehorned in at a later stage of development. One of Grotesque’s regular punch lines is the way women are portrayed. I’ll be straight with you, I’m an equal opportunist and think anything goes when it comes to making fun of people. However, I also understand subtlety and when it’s the right place and right time. So, that should say something to you when I say the humor is offensive. The level of objectifying women and the overall sexism and misogyny in the game actually made me uncomfortable. How about another quote from Silent Dreams site (mind you, this is a BULLET POINT of one of the game’s features)? “Half-naked virgins can be rescued from the claws of vile monsters to then follow you into battle as groupie-pets.” Make that into a joke about three or four hundred times and you’ll understand where I’m coming from.

Oh, and about the story of the game? You are Drake, an emo/goth guy that failed his military exams. Since there is apparently nothing left to live for outside of the military, Drake attempts to commit suicide. However, he’s stopped by Holy Avatar, or, as he likes to constantly repeat in every single sentence of text, “his semi-divine humble self.” Funny stuff, right? Holy Avatar then recruits Drake as the commander of a team to fight against the bad guys that want to take over the blah, blah, blah, blah, blah. Team up with a rag-tag group of blah, blah, blah. Forests and caves blah, blah, blah. The game is so packed full of slow, boring, uninspired plot devices and dialogue that I couldn’t be bothered to pay attention to what was happening. 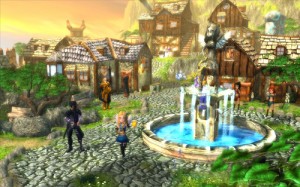 So, let’s talk game mechanics. Even through the bad visuals, distasteful humor, and copy-and-paste story there has to at least be a decent game to play, right? Well, not really. Primarily, it’s due to the fact that there is nothing special about it. Like Silent Dreams stated, it is a turn based, tactical RPG a la Fire Emblem and Final Fantasy Tactics, but the game rarely allows any chance for tactics. Examples: Grotesque Tactics: Evil Heroes gives you no ability to fix the position of your archers, so they constantly move themselves to the frontlines of battle, which is extremely annoying due to their HP impairments. Since all of the archers of the game are also women, which Silent Dreams like to joke about a little too much, they are written as clinically insane, extremely jealous and head over heels for Holy Avatar. Because of this, they also like to arbitrarily shoot anyone standing next him whether they are in your party or not. In an attempt to stay consistent with their characters, I would at least understand if the females shot each other, but why shoot a male ally?

Then, there are “Obsessions,” which are Grotesque Tactics: Evil Heroes’ one vaguely unique quality. When a character deals or takes enough damage, their Obsessions activate. Think limit breaks from Final Fantasy 7. According to the game, each character’s Overdrive has advantages and disadvantages. While I can see that for some of the Obsessions, this doesn’t hold true to all of them. For instance, when Drake releases his Obsession, he gives a “motivational speech” to the group and causes them to do better for a few turns. The downside is that once his adrenaline wanes, he becomes depressed and performs poorly for a few turns. I get that and I’m cool with it. Some Obsession moves, like one belonging to the Angel that your party recruits, appear to have no visible upsides. She literally gets pissed, flies over to Drake, and beats the snot out of him without returning to her original position. So, now she has effectively moved to where she can be easily damaged by an enemy and has caused my Commander to lose HP. Upside anyone? Didn’t think so. The worst part about Obsessions is that you can’t physically activate them. They just happen. So, when Holy Avatar’s Obsessions occurs and he recants a boring, self-indulgent story, not only do the enemies nearby get stricken with status effects, but so do your party members that are in close proximity. Even if I’m watching the Obsession gauge rise, I can’t move the character away from the fight because A) I won’t get to use the Obsession since I won’t be attacking or getting attacked and B) half the time your characters get stuck due to being blocked in by your other party members. 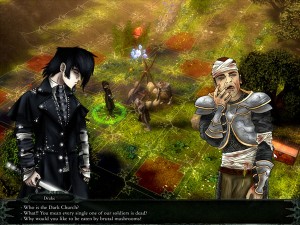 That being said, when things actually did work out to my advantage I could almost see the game that Silent Dreams wanted me to play. But the next thing you know, you run into a glitch where one or more of your party members is suddenly unplayable and you are brought back to the harsh reality that the game is a hot mess.

If you are still reading this review at this point, do yourself a favor and save the twenty dollars that Silent Dreams is ludicrously asking you to pay for Grotesque Tactics: Evil Heroes. Instead, buy one of the other tactical RPGs that they have compared themselves to. Or, for that matter, if you want a truly ironically funny game, try out Deadly Premonition on the Xbox 360. If you don’t like either of those suggestions, just look for something remotely entertaining to spend that money on, like a lot of Silly Putty. Or a mop.

P.S. I’m still trying to figure out why they are “evil heroes.” I mean, they are fighting bad guys. Maybe it’s that irony. Like, they are evil because the game is so bad? I don’t know. None of this makes sense…