Everyone here loves Blizzard, and that much is pretty clear by now. But while the game publishing giant is known mostly for its World of Warcraft franchise and, to some nostalgic players perhaps, for its older games adventure and fantasy RPGs Starcraft and Diablo, there is more to Blizzard than meets the eye. Recently, the media franchise has launched Hearthstone, a type of game almost none of the fans would ever expect from the company: a game of cards. Yes, that’s right, there’s a new Blizzard card deck game in town and its narrative content is derived from the popular Word of Warcraft universe. The players assume the role of a class, just like in WoW (the tutorial campaigns train you as a mage, but you’re free to play the other classes later as well), and then compete against each other by playing the hand they were dealt, in rounds. At the beginning of each turn, the player receives another card, since the older cards are laid on the deck according to the player’s strategy. 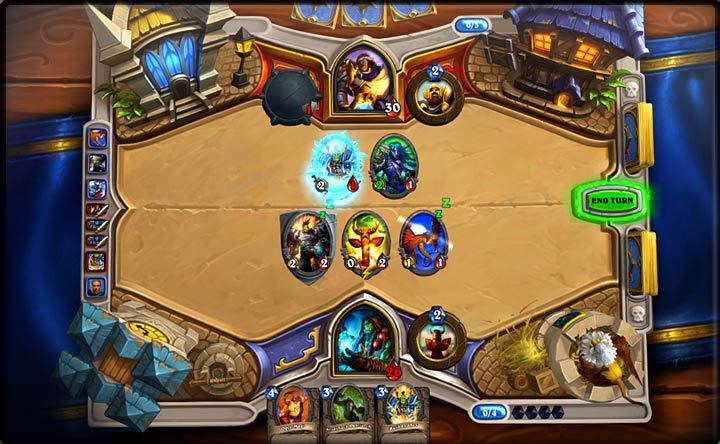 The best thing about the nee Blizzard card deck game is the fact that it’s based both on luck and on building the player’s capacity to plan ahead. It’s true that sometimes you may just get an unlucky set of cards drawn and your opponent may get dramatically better cards, turning the tide of the game in their favor – but such great differences happen very rarely. Also, the players are not completely helpless about the cards they receive, since you can build your own custom deck of cards in Hearthstone and include rarer and more powerful cards in it, as you quest and gain access to such cards.

There are two modes of playing in Hearthstone: at the inn (where you train against the artificial intelligence system, on two difficulties, for beginners and for experts), and against real players. Fighting a match against a real player yields better rewards, as it was to be expected from a Blizzard card deck game (if anyone could ever conceive it before finding out about its impending launch). The game’s system automatically matches you against a player of similar skills and experience in a matter of seconds from the moment you push the button signaling you want to play against another player. The graphics are also impressive, and the sounds and voices are taken out of the World of Warcraft universe, being more than familiar to Wow players.

Now that we’ve gotten the technical details about the Blizzard card deck game out of the way, let’s move on to what’s really the most exciting thing about it: the lore. Definitely the lore. The nine classes which you can play on in Hearthstone are illustrated by a legendary figure of that class, complete with the voice overs, the looks and the spells to complete the character feel. There are definitely a lot of inside jokes as well (for example, how smug Hemet Nesingwary Jr. is about his hunting adventures and how he brags on and on about his book, “The Green Hills of Stranglethorn”). About the characters that illustrate each class of Hearthstone, let’s just say that the mage is Jaina Proudmore, the shaman is Thrall, the warrior is Garrosh Hellscream, the druid is Malfurion Stormrage and the priest is the boy-kind Anduin Wrynn.

If that wasn’t enough to get you excited about the new Blizzard card deck game, then we also need to mention that the game is completely free to play and that completing some missions and achievements in it (like defeating three players in a row) can earn you awesome rewards in World of Warcraft. For example, the task mentioned above (of winning three duels) rewards you with a beautiful white and blue glowing flying mount, which you receive by mail as soon as you log out of Hearthstone and back into World of Warcraft. We don’t know about you, but we can hardly wait to find out more about what other rewards we can unlock by playing this beautiful card game.