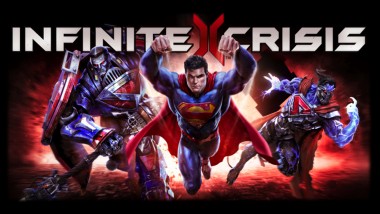 Infinite Crisis is yet another MOBA game, only this time, it is set in the DC universe. As a young boy, I grew up watching the Batman Animated series, and seeing Kevin Conroy do the voice for Batman in this game was a real treat for me.

The game looks very nice, with cartoony graphics and manages to capture the essence of the DC superheroes very well. Despite the nice graphics, the game seems rather unbalanced and it’s kind of difficult to access some of its game modes.

The world is beautifully drawn, with a very comic book look, and together with  the hero introductions, strong voice acting and lore videos, everything comes together to create an awesome story.

In the pool of Champions there are multiple representation of the same hero, but they do manage to explain that very well. A tear in the DC multiverse forces six universes to blend together, giving you the option to choose between different versions of Batman for example. Each of the Wonder Women, Green Lanterns, Batmans, or Jokers have their own personalities and distinct powers, or roles. Depending on which version you choose, they will have different interactions with enemies and friends. 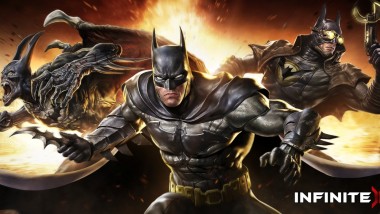 Infinite Crisis features a classic MOBA style game mode, with three-lanes, named Gotham Divided, but my personal favorite map, is the one called Coast City, which is a two-lane map with a massive jungle area. There are a lot of heroes capable of junging, and they can fight for control of the neutral camps, or capture the three very important Power Relays that provide your team with bonuses when captured.  I found it refreshing to see a PC MOBA focusing on something else than the classic three lane map.

While the Costal City map is very fun, the other four modes leave a lot to be desired from. Because of its infancy, Infinite Crisis has a small player count at the moment, and in order to make the queue times smaller, they made the Costal City game mode the only one to have open queue. Indeed they did succeed in making the queue times faster, but the big problem is that the other game modes can only be played in a custom game, which requires you to invite other player, and if you don’t have enough friends online, or if you do not have enough friends that actually play this game, then you can’t play these modes.

They way other similar games fixed this issue, is by filling the remaining empty slots with bots, but unfortunately this is not possible in Infinite Crisis. They have only added two bot-modes, a 1 versus 1 mode, that is different from its online counterpart, and the Costal City mode, that did not require a bot-mode, for it is the only game mode where you won’t have any problems finding online matches. I think that bots are extremely important for a MOBA game to have. They will not only fix queue problem, but they will also teach new players the basics, such as learning the maps, discovering the tactics and figuring out each of the heroes abilities. They are also very important for those people that do not want to play online and hate PvP battles.

On the other hand, the heroes rooster is very nicely done.  There are 41 Champions to choose from, and the game has a weekly rotation of free heroes.  I also found that earning credits to buy new Champions is very easy to do. Aside from the free characters that I was given when I first started the game, the first hero that I’ve spend credits to unlock, was Poison Ivy, a Champion that showcases the way Infinite Crisis is trying to redefine the roles of a traditional MOBA. Ivy is not just a support character with low attacks and a lot of healing abilities, but she can also fight on her own. She is not the only hero that can do that, as many heroes classified as support can do the same thing.

The assassin role is a little unbalanced. A feed Flash is basically unstoppable, with powerful attacks that can kill you in an instant, a great ultimate ability, where you take a lot of damage, while the Flash is completely immune to any attack, and his incredible speed, that gets him in and out of combat in the blink of an eye. In a game that does not have a Sprint ability, like Smite does, the insane blink and movement abilities available in the assassins toolkit, are a real problem to me. I found the in order to catch up with the Flash you need to buy the very expensive blink item, or choose an assassin of your own. The best for dealing with him are, the Atomic Wonder Woman, or the Nightmare Robin, that can easily catch their pray and, at the same time, do tons of damage. Another think about the assassins, is that they tend to get very tanky in the later stages of the game, meaning that not only they will do lots of damage, but they will also go down very hard. Imbalances in MOBA games are bound to happen, especially at the beginning of the game’s lifespan, but the fact that this is a problem across an entire class is very frustrating. 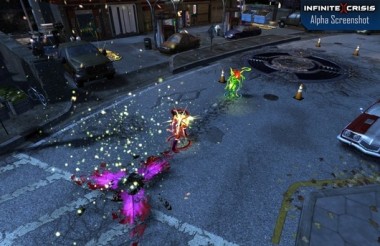 Fortunately, the ability called Super Speed, one of Infinite Crisis’ 53 Stolen Powers, allowed me to get away from those pesky assassins. Each Champion can choose two of these powers before the game starts, so, once you unlock it, I strongly recommend you pick it up. These Stolen Powers are similar to the Summoners Abilities in LoL (League of legends), but in Infinite Crisis, seeing how it is a DC game after all, they are a lot cooler. Except for the Super Speed, that I’ve already talked about, the most notable of these powers are the Consume and the Super Strength. With the first one, you can regain health, while with the second one, you can pick up large object, such as cars, and throw them at the enemy. These environmental object are not only used to do damage, but you can also use them to block the path of enemies, changing the entire flow of the map in the later stages. These abilities are very useful so you must always keep them in mind when building a dynamic and balanced team.

I love the game, especially the Coast City mode, but then again I am a big fan of the DC universe. I wish that the other game modes were easier to play, but, who knows, maybe in the future they will fix these issues.

The fact that you have a lot of Champions to choose from, and that they are rather easy to unlock, is a welcoming sight, but without the proper tools (bot maps similar to the ones online) it is very hard to learn how to use them to their full potential. I am sure that soon enough all of the game mode will be available for queue, but until then we must make do with what we have.

Even so, Infinite Crisis is a very fun game, that does interesting new things without straying away too much from the MOBA genre. Although the assassins feel a little overpowered, future patches will most definitely fix that (remember how overpowered some heroes were at the beginning of Smite, and even today, two years since its release, the new heroes that they add are very hard to deal with, and usually get nerfed in future patches), but until then, the Stolen Powers will help balance thing a little.

Lots of Champions to choose from

The Stolen powers are very fun to use

Classes are a bit different from a traditional MOBA

Only one available game mode where you can queue up

Lack of bot-maps for new players

The assassins class is overpowered