The Mad Max video game was developed by the same studio that brought us the Just Cause franchise – Avalanche Studios. After becoming obsessed with the movie, I just had to see if the game was on par.

The game starts with Max fighting for his life – and car; unfortunately, the intro scene isn’t playable at all and it leaves you a little bit jaded. I still don’t understand why the developer didn’t make it a quick-time event, but at least it was fun.

Left as a feast for vultures after a long and horrendous battle with a behemoth warlord called Scabrous Scrotus, Max escapes death’s clutches and finds a peculiar ally. Inspired by Victor Hugo’s Quasimodo, Chumbucket, a genius mechanic, vows to help Max by building him a new car, getting revenge on the ones who left him to die and retrieving his beloved vehicle. 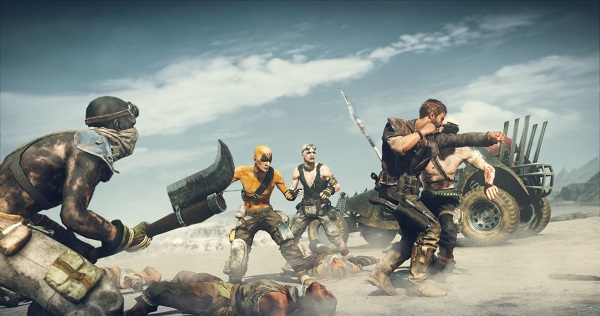 You get a present too – it’s a knuckle sandwich!

But Mad Max first needs a car if he wants to go on a blood-filled rampage. After hesitantly accepting Chumbucket’s allegiance, Max starts searching for parts and upgrades to turn an old scrap of a car into something ridable.

And this is where the fun starts – high speed car combat, awesome fisticuffs and a tiresome infinite scavenge for scrap metal. 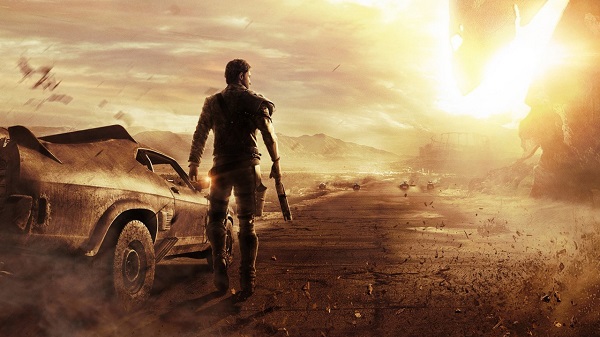 Cue Back in Black by AC/DC.

While exploring the vast wasteland – which is frikin’ huge. I mean, bigger than GTA V; you’ll encounter lone rangers or parties comprised of war cars bridled with spikes and equipped with a ton of explosives. Inside, you’ll find War Boys – you know, your usual howling psychopaths.

You can’t compete with a psycho, right? Well, thank God Max has a trick up his sleeve – and that is a car mounted harpoon. Enemies flanking your from all sides? Focus on one with your harpoon and tear his door off. Target a vehicle’s rear so you can catapult straight into it for that sweet bonus ram damage.

You can even expose the enemy’s car piece by piece until you get to its gas tank – say bye bye to old mister Scruff over here. But the best upgrade has to be the ability to yank a driver right out of his seat – hilarity ensues every time. 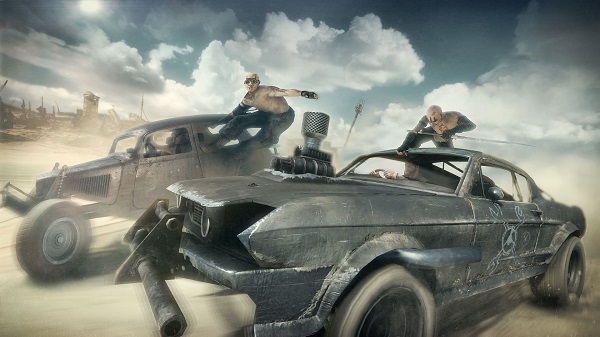 Usually, you are the hunted, but if you stick to your guns and fight back, enemy drivers will understand that they’ve stepped out of the frying pan and straight into the fire. In their hasty retreat, you can either let them run away or become the hunter – I recommend going for the latter just because it entails mindless fun. 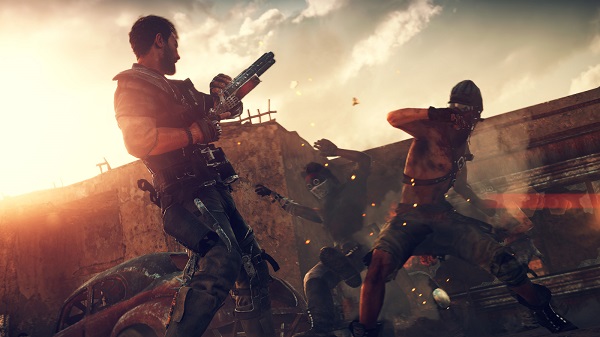 If you want to beat up a psychopath, you need to become one too.

Across the wasteland, enemy factions have settled little fortresses. War Boys have built gruesome scarecrow-like towers, which can be harpooned and tore down quite easily. Tear down gates, yank snipers from their nets – basically, impale whoever stands in your way.

Eventually you’ll have enough resources to acquire the Thunderpoon and everything will become obsolete in Max’s eyes. The Thunderpoon is a somewhat post-apocalyptic RPG – it adds explosives to the tips of your harpoons and its tremendously useful against heavily armoured foes.

You have a ton of upgrades to embellish your car with – from spikes, more ramming power,  armour and flamethrowers to better manoeuvrability, bigger engines and nitro boosts.

Some of them will require Max to collect scrap metal, while others are unlocked via story progression. There are some, however, that require the player to sink his teeth into challenges. Take upgrading your armour to the max, you’ll need to gather scrap metal, but also clear out every single screaming, hooting blood-thirsty psychopath from a region of the map.

It’s an awesome open-world experience, but sometimes it’s a little bit overwhelming. There are so many things to do that it just sucks the fun out of the game – from a certain point that is.

Yes, it does offer the freedom to tackle side missions when you choose to but after the first four or five hours into the game, everything will repeat itself. Pairing Mad Max’s upgrades to these tiresome challenges becomes somewhat of a nuisance. Moreover, they aren’t that optional in the end because you’ll need to be at your best to finish the main campaign. 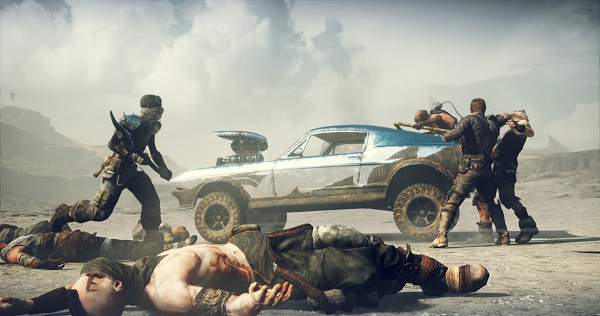 Seems like someone decided to die all of a sudden.

Yet, everything is set in a beautifully made wasteland. I found myself more often than not just driving around and gazing at the landscape. It’s not just a barren desert – it’s an eye-candy barren desert. Avalanche studios managed to develop more than a few regions with diverse themes – yellow dunes, dark craggy cliffs and peaks, blood red bluffs and sun-bleached white sand.

And then there’s the famous Gas Town that resembles a belching industrial Mordor – the sky is filled with smoke and mountains of trash a la Wall-E’s Earth.

However, the story doesn’t complement the awesome visuals. Don’t expect to play the movie, that’s for sure. All of the characters sport a blank personality, including Mad Max. They are uninteresting and downright boring.

All attempts at humour managed to make me sigh in contempt – I was playing a game written by an edgy high-schooler who just found out that 4chan exists. At one point I quit the game because I couldn’t stand those terrible try-hard jokes. 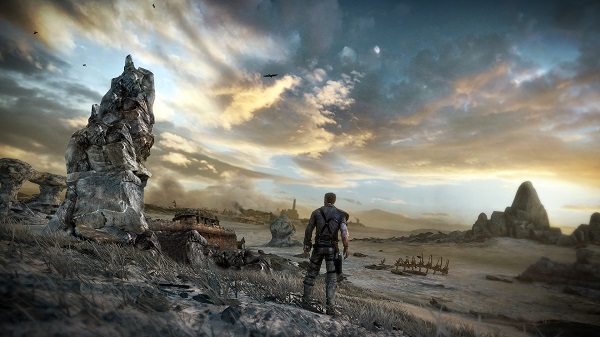 Now, where did I left my keys again?

If you just want mindless fun and Batman Arkham fighting mechanics, then it’s a must play. Skip listening to the story, and you’re golden.

I was fairly surprised to see that the PC port was more than excellent – but I still played the game with an Xbox One controller. Mad Max averaged at around 70 frames per second on our test rig, and that’s with its settings maxed out.

Controls are sometimes annoying – out of combat interaction keys requires the player to hold a button instead of tapping it. This quickly becomes mildly infuriating as you’ll feel like you’re wasting time by collecting scraps and waiting for Max to pick them up.

That goes for loot too.

There are a lot of cons on the list, but I was itching to get back into Mad Max and its ultra-fun playstyle. Yes, it does have shortcomings but it balances things out with couch-gripping mechanics.

Get to ramming speed, ready your harpoons ladies and gents and prepare to blast that nitro straight into a War Boys convo.

You can download Mad Max off of Steam– it costs $55. You can also purchase Mad Max on Amazon.

Mad Max has been launched on – PC, PlayStation 4 and Xbox One.