The MGS series has always been about complex plots and Shyamalan-like twists and turns. Every game in the series ends with a blast that either makes you think you didn’t understood anything prior to the final chapter or a relentless feeling of utter confusion begins to overwhelm you. Basically, you need to really sink your teeth into a MGS title to actually figure things out.

Metal Gear Solid 5 Phantom Pain delves straight into Hideo Kojima’s craziness. It’s unforgiving with newcomers to the series, but it’s still a highly enjoyable game if this is your first MGS title.

Outstanding cinematography is paired with badly-written and badly-acted lines, more often than not. However, I found myself itching to get back into the game even after 50 plus hours inside Kojima’s mind. 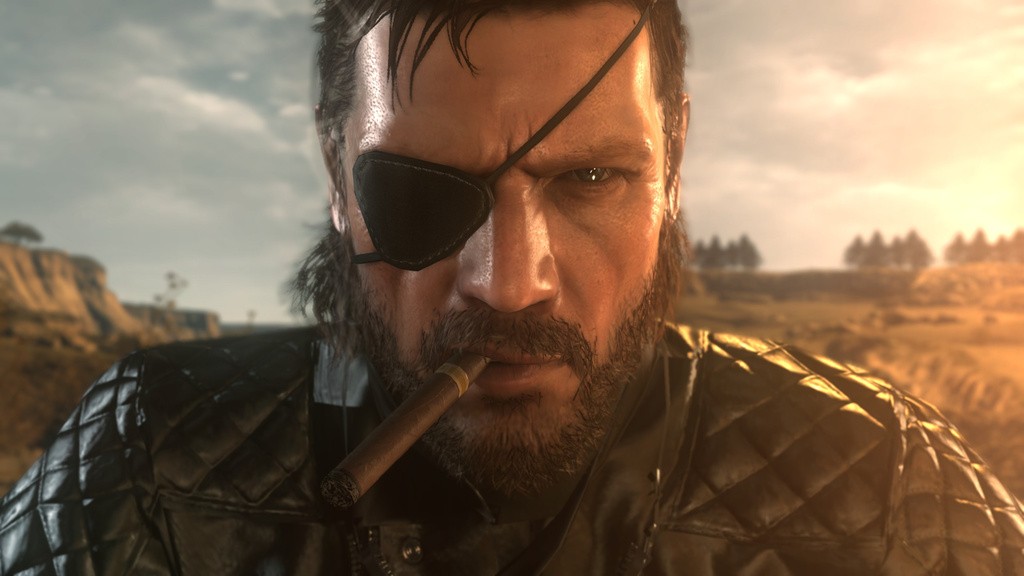 Are you prepared for some killing?

Metal Gear Solid 5 has its moments where you’ll giggle and laugh uncontrollably – especially when you’ll try to pet your dog. Yet, it tackles world issues that most games are afraid of showcasing – child soldiers, torture and the toll that nuclear proliferation takes on humanity. It has a serious tone throughout the game’s entirety that immerses the player even more into Kojima’s legendary, but crazy franchise. 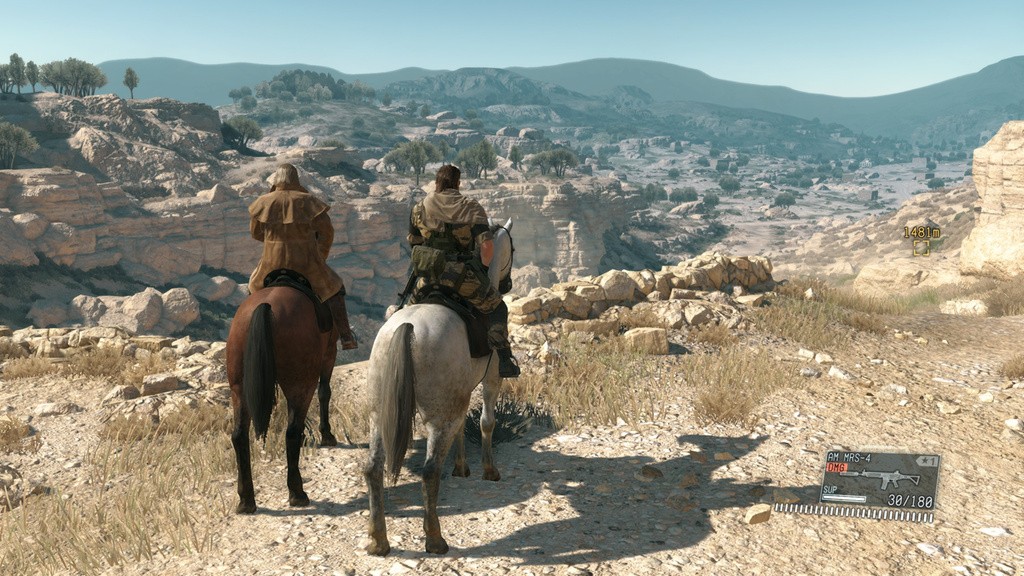 You’ll be playing as Big Boss, commander and chief, leader supreme of the private military group dubbed The Diamond Dogs. The story blends historical events from the 1980s with a drop of James Bond to it,  all enveloped in Asimov-worthy sci-fi.

It’s riddled with subtle references that only die-hard fans of the series will understand. Newcomers will feel key-scenes as anti-climactic. If you really want to get more bang out of your buck, I highly recommend you take a look at Konami’s previous titles. Still, it’s worth playing just for its great mechanics and story-telling.

Metal Gear Solid Phantom Pain is mainly set in Africa and Afghanistan. Sometimes you’ll need to get to your primary base of operations somewhere in the ocean. Don’t expect to waste time travelling towards those locations, it’s all done in a jiffy.

It’s not all about slowly sneaking through vents hidden inside a cardboard box just so you can reach point B. 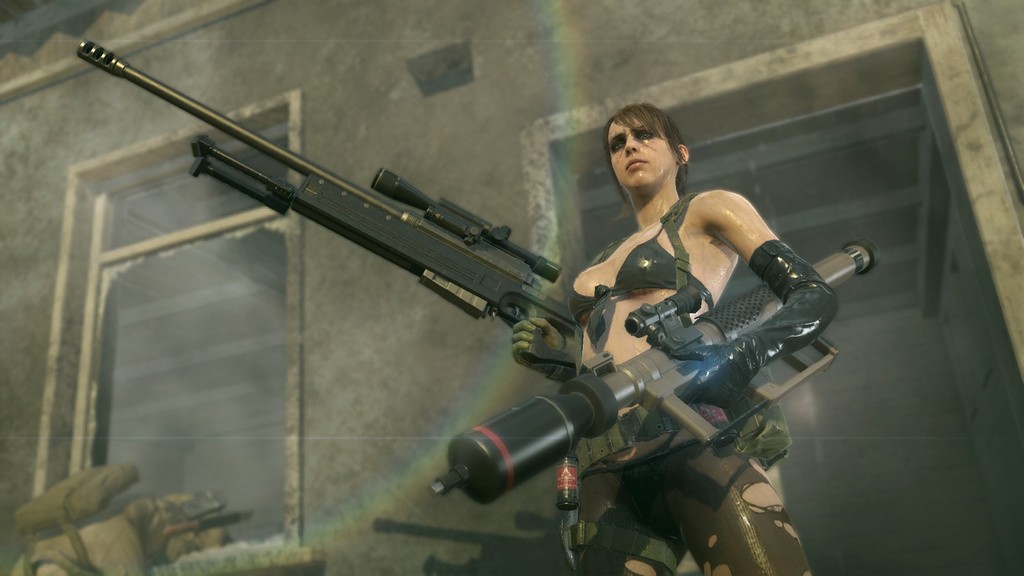 MGS doesn’t always require you to sneak and crawl. Frankly, some missions can’t be completed any other way than going head-in and blowing everything to smithereens. But you’ll find yourself on the brink of defeat if  you have a happy triggerfinger. Metal Gear Solid Phantom Pain rewards players that take their time to learn how guards patrol and figure out key sniper positions.

Having trouble with certain Metal Gear Solid 5 Side Ops? Check out our complete guide to every side op in the game.

Big Boss can easily sprint back and forth. Each movement, each action is more than satisfying because of the game’s responsive controls. In this case it’s different than previous MGS titles, and not in a bad way. Former iterations were plagued with slow and just pure daft characters. 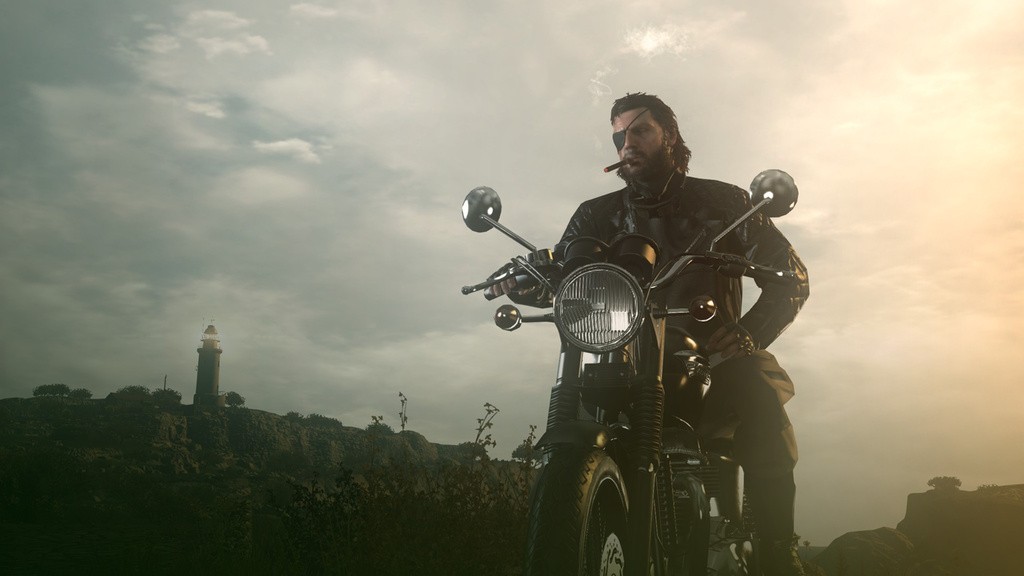 The game’s new Reflex system gives the gamer time to think and decide what’s best to do when caught off-guard by an enemy. If you’re spotted, the Reflex system will automatically turn on. This means that time is slowed, allowing the player to employ whatever tactic he chooses – quickly dodge, set up a decoy or put a hard slug inside your unfortunate foe’s brain.

If you want the game to feel more challenging than it is, you can turn off the Reflex system. 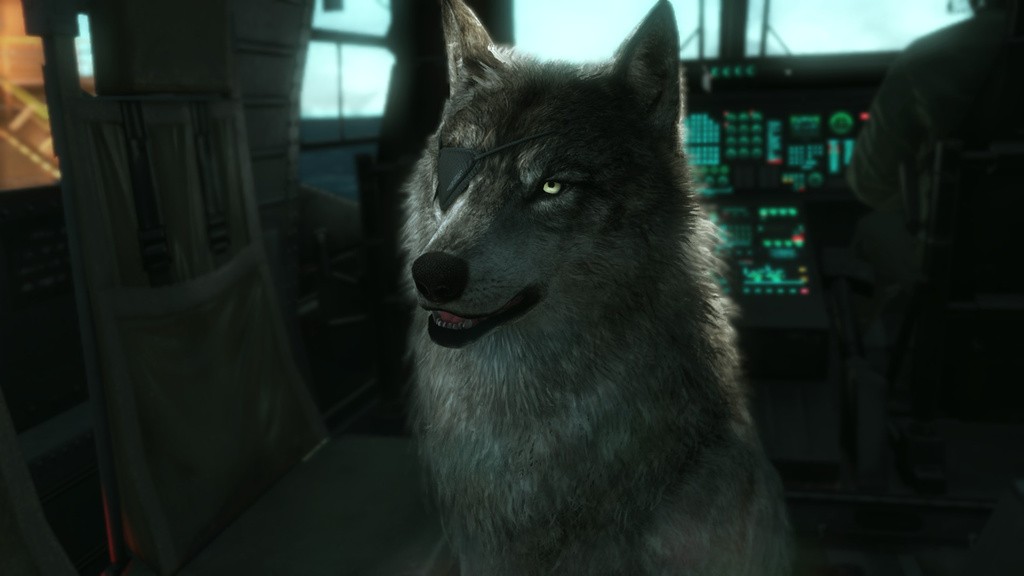 My name is snuffles and I kill people for a living.

Phantom Pain offers a plethora of tools to help tip the scales in your favor. One man against an army doesn’t sound that fair. One man armed with the best weaponry on the planet? Well, that sounds a little bit better.

Tools are so varied, it’s just a shame to not go through all of them. At least out of curiosity, if not out of necessity.

Big Boss has a prosthetic arm that can be configured in numerous ways. You have a Sonar upgrade that allows you to punch the ground and send shockwaves to nearby enemies. This stuns your foes for a short period of time.

One attachment that I found crucial to Big Boss is the grenade launcher. You just don’t know when a tank might want to show up for the party.

Big Boss never learned how to pet a dog.

Your main goal in Phantom Pain is to track down world powers and military leaders that conduct horrible, gruesome murders and follow through with your assassination contracts.

Metal Gear Solid 5 Phantom Pain unveils the brutality of the real world within its main story and side missions. You have over 100 side contracts to take care of. You’ll have so many things to do that you’ll ponder from time to time if MGS V has an end.

Like I noted before, Africa and Afghanistan are huge. Both locations are filled with humongous compounds, small military outposts and all sorts of world threats that nature just keeps shoving them at Big Boss. 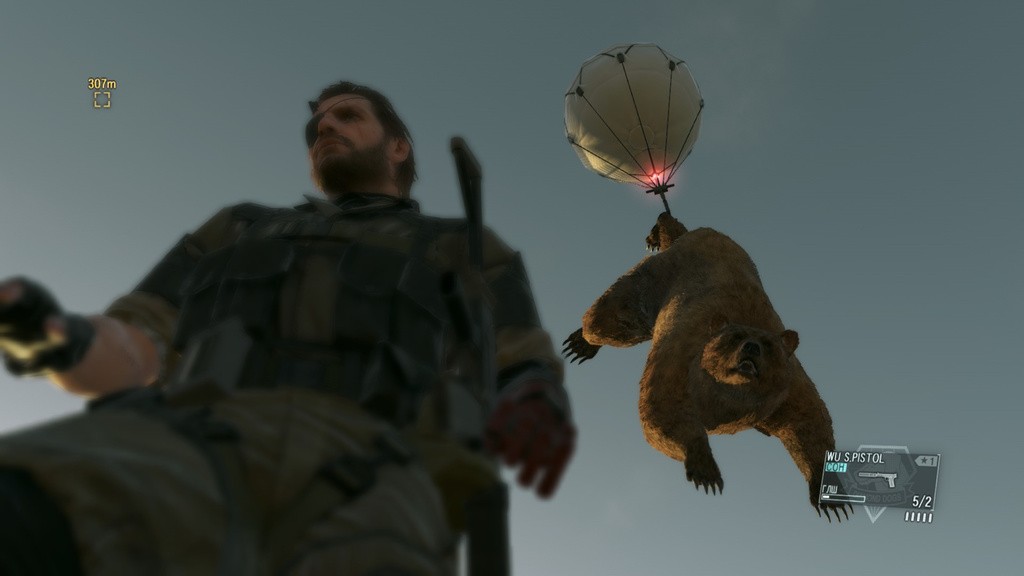 Outposts might contain a vehicle worth your while, or a soldier that you can interrogate if you quietly detain him.

If you finish missions just for the sake of completion rate, then you’re going the wrong way. Remember, you’re Big Boss and you need to build your own private army that keeps the evil of the world at bay.

You rank up troops by simply attaching a balloon to your new BFF’s waist so he can join your army. It may seem childish and stupid, but this ridiculous concept seems to work. This means that you need to be patient and not shoot everything on sight. A dead man is of no use – unless you are a necromancer, and if you are, you’re playing the wrong game buddy. 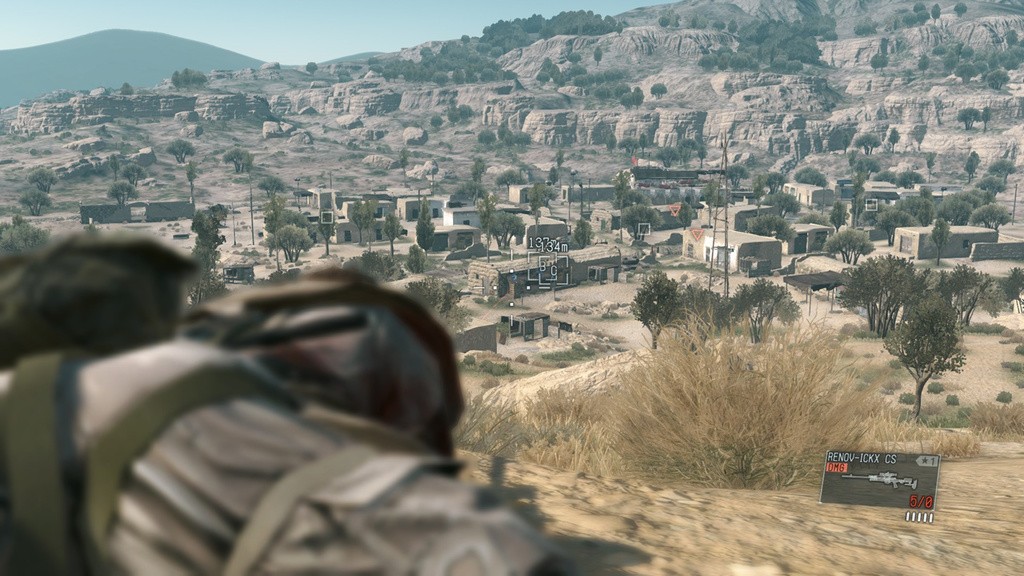 I spy with my little eye…

This may very well be the cornerstone of the MGS series as we know it. Previous titles primarily focused on stealth and sluggishly sneaking around. Metal Gear Solid 5 Phantom Pain is far more intense. Even if you take your time and pay attention to your surrounding, Mother Nature can drop in with her teeth ready to taste blood.

In this case, hungry coyotes do her bidding. They can be more than minor grievances that upset your playthrough. There’s no place that you can hide forever, and there’s no place safe in Phantom Pain.

Moreover, because the AI is so complex, it can find you anywhere you go. If you get spotted, enemies will try to find you by scouring your last known location and they will also randomly check spots. They won’t back down so easily and they will even go to further lengths of calling for back-up from nearby outposts. 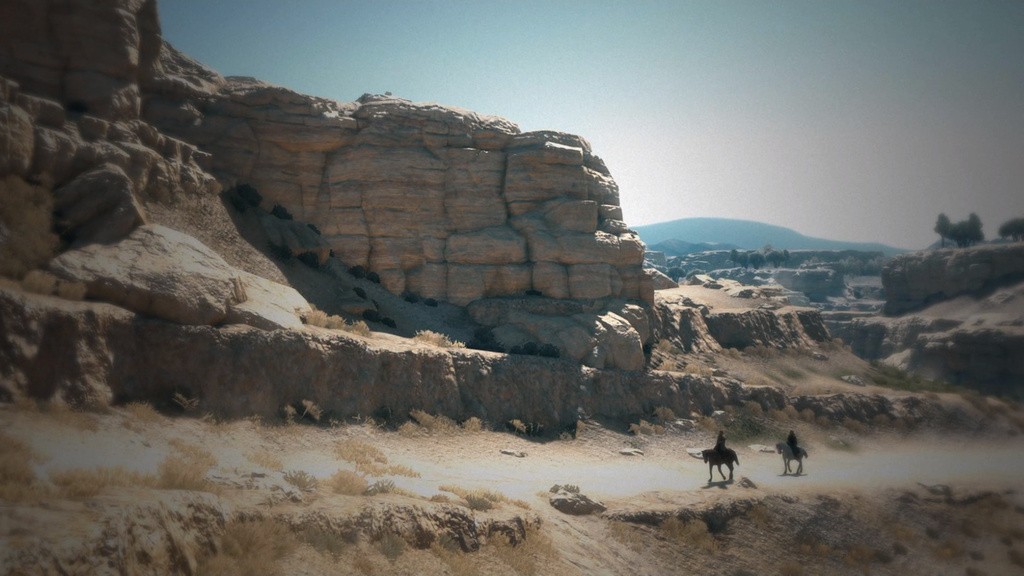 Capturing soldiers, stealing vehicles, taming wildlife and gathering resources doesn’t just ego-boost your highscore. They actually are of help back at your Mother Base – your offshore safe haven.

Soldiers which you’ve captured can be assigned to defend your base of operations, do research and more. It depends on what they are good at. Their different skills will help you to unlock weapons and new tech. 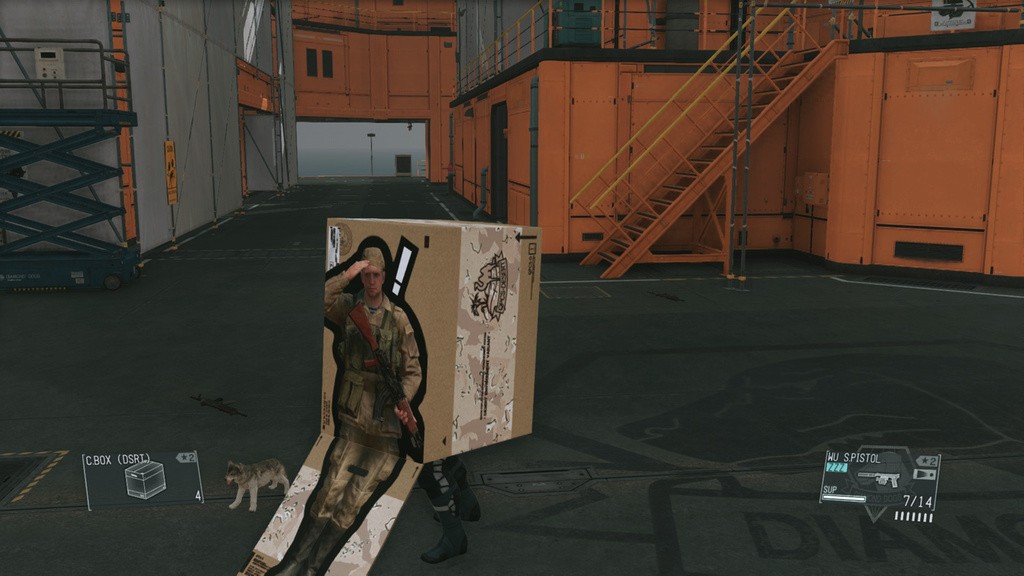 The bigger your base grows, the more soldier you can gather, and the faster your tech development will move forward.

One great addition is The Buddy System. Take your Walker and horse. They are known as Buddies and you can use them to help you with the majority of Metal Gear Solid missions. If you play your cards right, you can use your pup to distract foes in mid-battle.

As you advance, a human companion will come along with you. She proves to be a useful sidekick – sneaky and super precise.

MGS offers a highly enjoyable game experience, though newcomers should take heed and play previous titles before succumbing to The Phantom Pain.

There are plot twists, there are epic turnarounds, cinematography is excellent and characters are extraordinary.

Buy Metal Gear Solid 5: The Phantom Pain for PC via Steam and for PS3, PS4, Xbox 360 and Xbox One via Amazon.