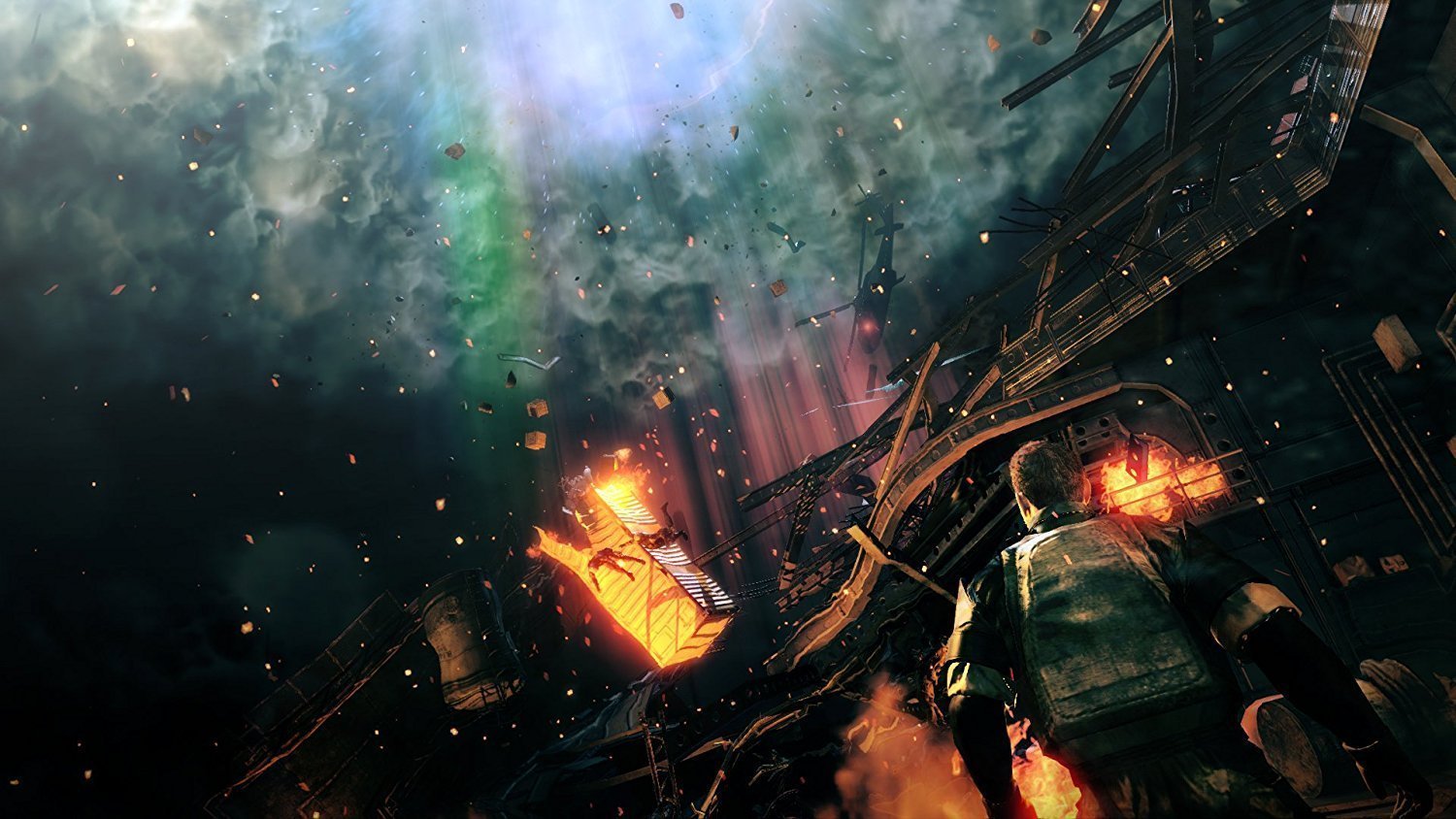 While Metal Gear games typically fit a military sci-fi theme, you'll find yourself thrust into a strange fantasy-esque plot featuring zombies and wormholes. The story begins in the same spot as The Phantom Pain, even recycling some of the same cutscenes. Where The Phantom Pain follows a character called Big Boss, this game splits off and instead focuses on soldiers under his command.

These soldiers (along with part of the base) are yanked through a mysterious wormhole into the world of Dite, where inhabitants have been turned into zombie-like creatures and other monsters by some kind of a parasite.

Dite is a wasteland, plagued with fog a filled with ruins you'll encounter. You could say it looks a lot like Angola and Afghanistan -- because Konami decided to recycle those maps from The Phantom Pain and use them to create the world in Survive.

Metal Gear Survive Is Missing Something 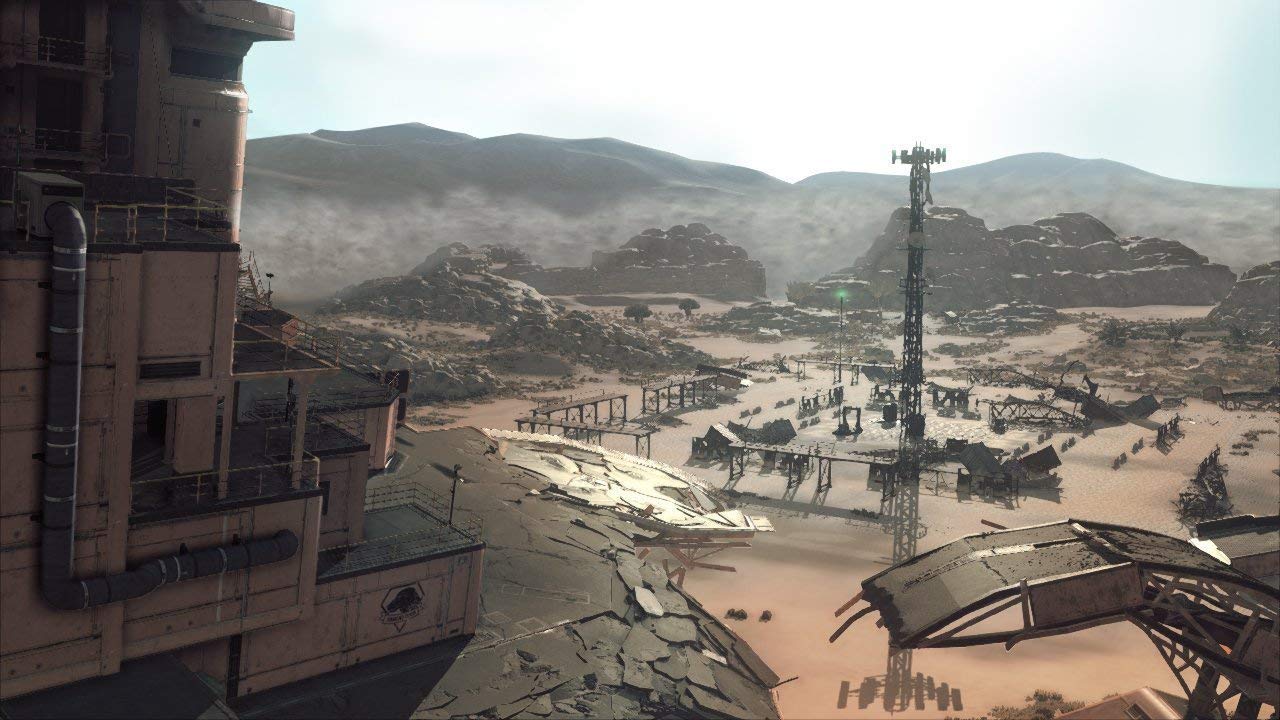 Metal Gear Survive is the first game in the series produced without Kojima Productions, Konami's former flagship studio. Hideo Kojima, reputed to be one of the best game designers in the world and the creator of the Metal Gear franchise, left Konami in 2015. At the time, Gamespot reported:

Power struggles between Kojima Productions and Konami have convinced the publisher to make drastic changes, including amending the employee status of its Metal Gear team. Some senior staff at the studio, including Kojima, now essentially work as contractors, not permanent employees.

It was an ugly time for Konami and for Kojima, who ultimately formed his own company and took much of his staff with him. This is unsurprising, as working at Konami post corporate restructuring has b​​een described as an "Orwellian nightmare."

Kojima and his team's absence shows in Metal Gear Survive.

As a Metal Gear Survive review will often note, Konami built Metal Gear Survive as a typical survival game at its core. You'll run around collecting food and water, making them usable, and base building. Like most survival games, these mechanics feel unnecessarily frustrating and boring. The need to craft and replenish an oxygen tank to navigate poisonous fog further exacerbates this tedium.

Tutorials plague the opening hours of the game. You'll run a series of bland, nearly-identical fetch quests that teach you to manage your hunger and thirst meters. You will collect resources and learn to craft rudimentary gear. You'll also learn to farm, build your base, repair your gear, and do everything needed to survive. You'll even rescue other survivors who will populate your base.

Once the pace picks up, you'll begin to expand your base. You can build huts, gadget workshops, medical repositories, and more. You may find the game's menu-heavy approach a bit tedious. But actually seeing your assembled team of survivors work on their assigned tasks can be enjoyable.

For half of the game, you'll fight Wanderers, crystal-headed zombies. Later, slightly more interesting enemies begin to show up. But enemies are predictable and unchallenging. While stealth has been a hallmark of the Metal Gear series, it's simply not necessary through most of this game. However, you do get more Kubon Energy, or money, for taking down enemies with stealth. But money isn't in short supply once things get going. Since you won't encounter much of a challenge, you'll often say "Why bother?"

Ultimately, Metal Gear Survive is all about micromanaging your hunger and thirst meters, which deplete when you do almost anything in the game. The survival aspects taint the rest of the experience. 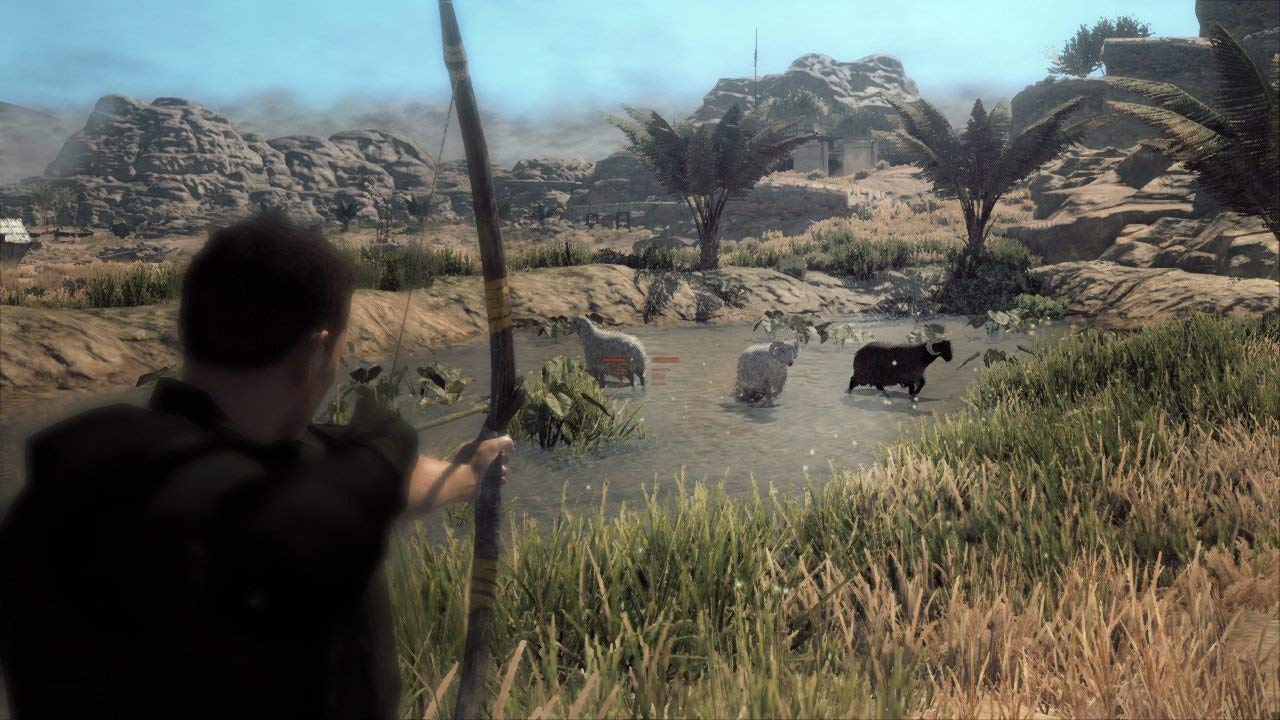 The first few missions in Metal Gear Survive review game mechanics. You'll spend seemingly forever "getting to the point," so to speak. Past that, missions largely involve exploration and "horde mode" style defense.

For instance, you'll track down teleporters in The Dust (the are in which you will spend most of your time). These allow you to travel farther inside the zone. Each time, you'll build defenses around the teleporter and defend it against a horde of attackers for a set period.

This rather unimaginative and formulaic approach is interesting for a while but quickly becomes bland. By the end of the story missions, you feel like you are completing chores rather than playing a game.

All in all, you're going to spend around 20 hours slugging your way through the campaign. Unfortunately, it's not a very rewarding experience.

Multiplayer missions offer some reprieve from the repetitiveness of Metal Gear Survive. Sure, you're still fighting off hordes and hordes of enemies without much variance in the gameplay, but at least you're doing it with friends. And unlike the campaign, some challenges do show their ugly faces.

Multiplayer missions offer you an opportunity to collect items and resources that carry over to the main game. So if you get stuck or bored, they give you a good way to advance without grinding through the "same old, same old." Instead, you can grind through a much different "same old, same old" with up to three friends as you fend off wave after wave of bad guys.

Of course, the multiplayer maps are lifted directly from the campaign. So you can't entirely escape the tediousness. But at least you're with friends.

The map for The Dust, for example, is lifted wholesale from The Phantom Pain. People who have played that installment will recognize it as Afghanistan, only blanketed in fog with some landmarks removed. Other parts of the game are directly lifted from the previous installment's Angola.

The game is littered with reused assets from previous games. It almost feels like the new team had no original ideas. Simply use old maps, add fog and haze to decrease visibility, throw in debris here and there, and hope no one notices.

Metal Gear Survive's graphics are good, but you'll find little that you haven't already seen if you're a loyal fan of the series. 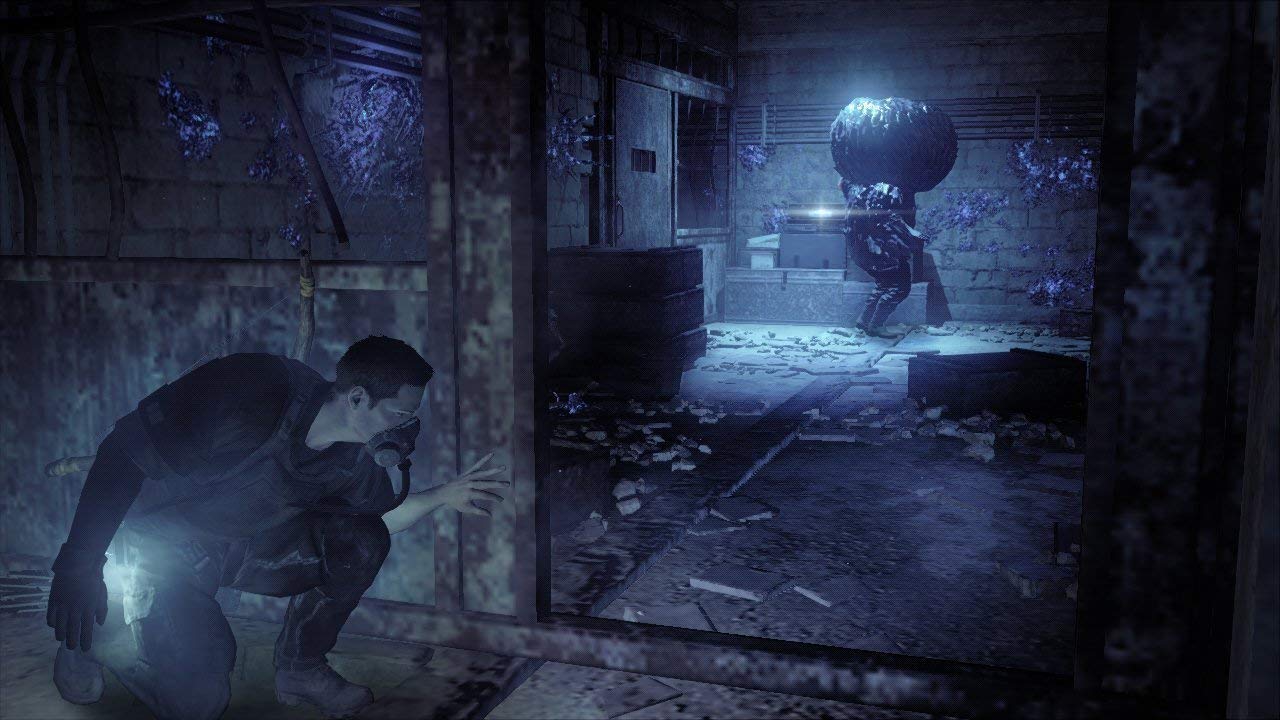 No Metal Gear Survive review would be complete without mentioning an unnecessary attempt to squeeze more money out of already-paying customers. You won't find any tactical espionage action in Metal Gear Survive, but you'll find plenty of microtransactions.

You only get one save file by default. If you want another, you'll need to dish out ten bucks. You can also spend real money on extra storage slots for crafted weapons, potions that increase the amount of in-game money you get from kills and increase the production yield of some buildings, and more. In addition, the game offers an assortment of emotes if you're into that sort of thing.

By default, you can only deploy one crew on resource-gathering missions. If you want more, you need to fork over another $10.

The game gives you a tiny amount of this real-money currency each day you log in, but it will take you 34 days straight to afford an extra save slot. After a week of playing, you can purchase a one-day boost.

Microtransactions are a contentious subject in modern gaming, but Metal Gear Survive takes an especially sleazy approach to getting you to spend extra money on the game.

How The Game Was Received

If you read nearly any Metal Gear Survive review, you'll notice that it is not well-liked. Professional reviewers at sites like Polygon and IGN struggle to rate this game at above a "meh."

Players are similarly unimpressed. On Amazon, for example, scarcely 50 percent of people who bought the game gave it above a three-star review.

"Don't waste your money on this garbage," one reviewer who received a refund wrote. "$10 for an extra save slot, are you kidding me Konami?"

"Repetitive and boring," another writes. "Finally gave up after about 10 hours of gameplay." The top review on the site (three stars), puts it simply for prospective buyers:

If you want to experience the most conceptually uninteresting train wreck in history then buy this.

Others say that the game becomes boring after only a few days. Many complain about the survival elements of starvation. Even people who gave the game a four-star rating say they were "bored in less than a week" and call it a "money grab."

As a survival game, it's a rather lackluster experience with little to offer. As a Metal Gear game, it's simply not. 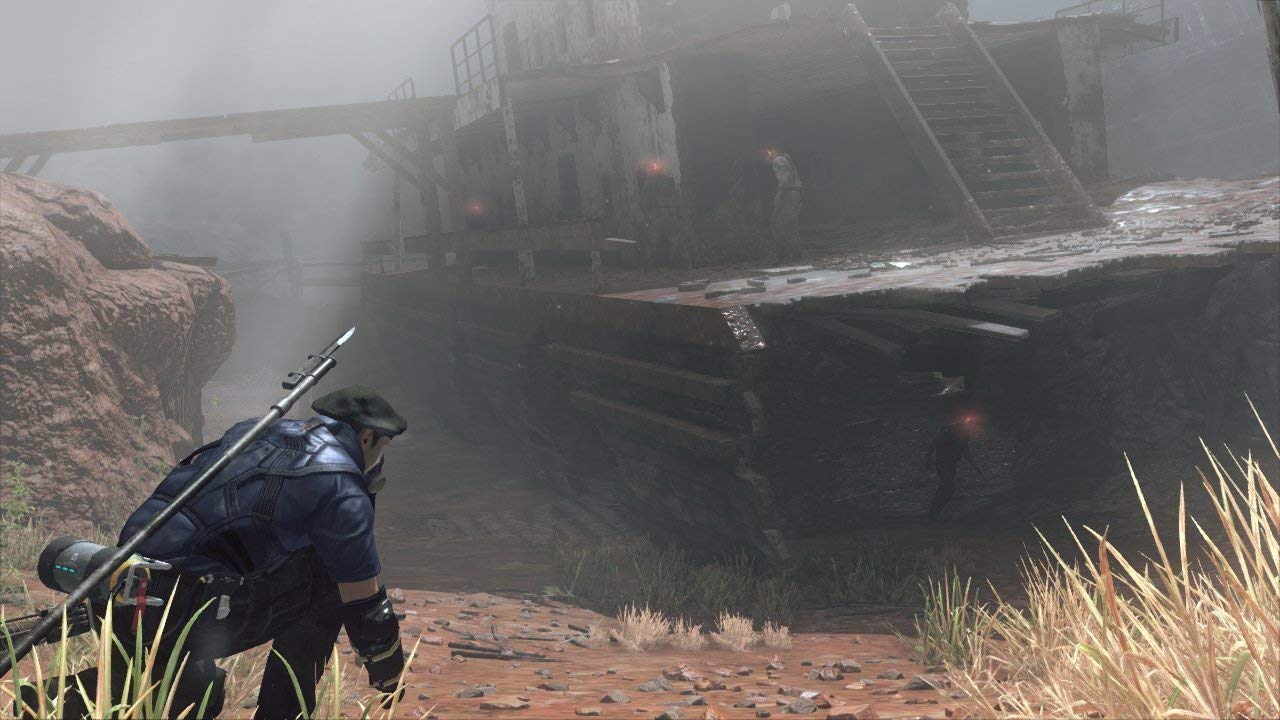 Do you love survival games? As any Metal Gear Survive review will tell you, you might enjoy this game for a few days. Then it becomes stale and repetitive. If you're a fan of the Metal Gear saga, you can safely skip this one without feeling guilty. It doesn't feel like a Metal Gear game at all.

Metal Gear Survive is plagued by tutorials far into the experience. You'll find this game to be a stale skeleton of its predecessors, a joyless and soulless mess that was haphazardly thrown together by whoever was left after the original team's departure.

On top of the lazy worldbuilding and game design, boring non-player characters, you'll find yourself beleaguered by Metal Gear Survive's insistence that you spend even more money on the game to truly enjoy it.

While many games offer cosmetic items for purchase, Metal Gear Survive hides many basic features behind a paywall. If you want to start a new character without deleting your old one, it will cost you. If you want to send out additional scavenging teams, be prepared to fork over more money.

There's a chance you'll find some enjoyment in this game. There's an even better chance you'll regret your decision to buy it, no matter what the price. Some games simply aren't good, and Metal Gear Survive is one of them.