Mortal Kombat is the latest game in this almost 20 year old series, created from what seemed to be their final installment. With Midway bankrupt, Mortal Kombat was picked up by Warner Bros., who shortly released their bizarre team-up game, Mortal Kombat vs. DC Universe. Mortal Kombat strikes back with its time tested fast-paced, bloody beat-downs and gruesome fatalities.

Mortal Kombat picks up from the end of Mortal Kombat: Armageddon, where almost all the warriors had been killed except Raiden and Shao Khan. As they fight atop Blaze’s pyramid, Shao Khan mercilessly beats Raiden but t the last moment, Raiden sends a mental message back to his past-self back at the start of the first Mortal Kombat Tournament and receives a premonition that “He must win” or else the future will end in ruin. Through Raidens mental images and premonitions, he attempts to alter the timeline to prevent the destruction of the realms and through the changes he makes, the course of history is also altered. 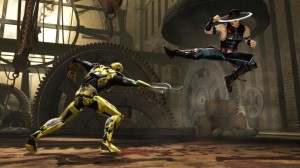 Story Mode is the main focus of Mortal Kombat, featuring gameplay as 16 out of the 28 playable characters (all the good characters mostly), with each character getting about four or five fights before passing the torch off to another character. The Lin Kuei ninjas are a large focus on much of the Tournaments, including Smoke, Sub-Zero, Sektor and Cyrax, even showing the original human forms of Sektor and Cyrax for the first time in Mortal Kombat history. 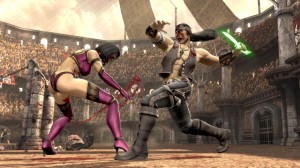 The story mode alone can provide 7-8 hours of good solid story and gameplay, but that’s not the only mode available in Mortal Kombat. There’s arcade mode similar to the original games where you climb higher and higher to fight Goro and eventually Shao Khan, as well as the Challenge Tower. The Challenge Tower allows players to climb a tower which ascends in difficult, presenting harder tasks, tougher enemies, as well as helping the player learn fatalities and fighting tactics. This mode also features some mini-games in between. 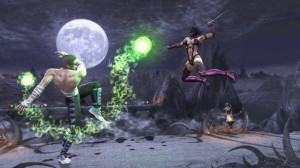 Mortal Kombat also implements a point system for defeating enemies, completing mini-games and even climbing the Challenge tower. Of course, that also means the Krypt is back to use your hard-earned points in. There’s over 350 krypts to unlock, including artwork, costumes, fatalaities and more. Despite the number of unlockables, unlocking every one of them takes forever and is generally time-consuming and mundane. 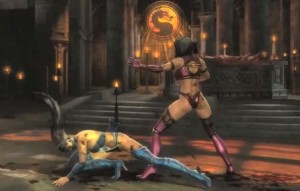 Mortal Kombat is centered around 3-D fighters in a 2-D fighting plane, much like many of the successful fighting games you see today like Super Street Fighter 4 and Marvel vs. Capcom. It also went to a 4 button fighting scheme, each button responding to each limb, with the block button as well of course. The new scheme is simple to use but the Block button on the RT/R2 button seems a bit out of place. Similarly, Mortal Kombat uses a new ‘super meter’ to augment the fighting gameplay. The super meter can be stored up to 3 times and be unleashed at different stages to execute several abilities: enhance a special move to make it faster and hit harder; to interrupt an opponent’s combo; or to unleash an “X-ray” move, a move that goes into slow motion x-ray to show the bones and organs being destroyed by the brutal move. Deciding whether to store or use the meter keeps the fights fresh and adds a whole new level to the regular Mortal Kombat fighting style. 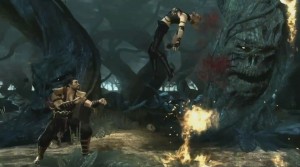 It’s worth noting, Shao Khan is unfortunately easily exploitable by getting close up quickly using some ranged or teleporting characters like Smoke or Raiden, regardless of difficulty setting. It’s not game breaking, but it’s a much easier fight then the original game where he’d beat you brutally before you can even blink. Another concept that Mortal Kombat has implemented is that some boss characters like Shao Khan or Goro can occasionally negate attacks done to them , making fighting them an even more daunting task. 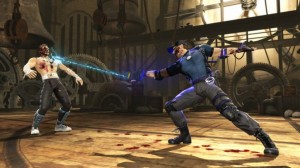 Overall, the newest title in the Mortal Kombat series has finally gotten back to its roots and created a breath of fresh air in the fighting game community. Its brilliant new story and “tried’n’true” gameplay mechanics make this a game worth picking up for anyone: fighting game fan or not. It doesn’t hurt that new content characters have already been announced as well. 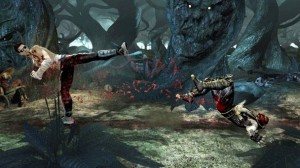