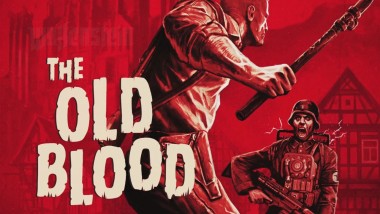 Wolfenstein: The Old Blood is a five to six hours, stand-alone expansion for Wolfenstein: The New Order (that was released in 2014). This prequel will take you through some great and tense moments, while experiencing a lot of memorable and exciting shootouts. The pace makes this game very fun, but it is not as thoughtful as its predecessor. We all know that The New Order was at its best during its quiet and tense moments of exploration, or during the character development, and The Old Blood barely gives you enough time to catch your breath.

The game takes place in 1946, where you’ll find yourself once more in the boots of William B. J. Blazkowicz, before he saved the entire world from technologically superior Nazis. The story starts as our hero is infiltrating a Nazi fortress, that is located on the side of a mountain. It is a good setting, but it overstays its welcome in my opinion. I wandered through the castle for about two hours, which is almost half of the game’s length, and I must admit that I was getting pretty sick of it. After you escape from the fortress, you will find yourself in a village, which is very similar to the one in Wolfenstein 2009, where you get to fight off more of the same enemies, although I was pleasantly surprised to discover prototype versions of what would become standard enemies in The New Order. 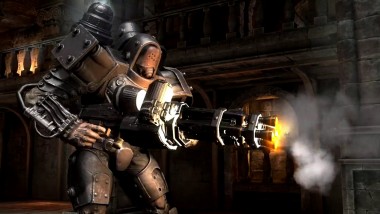 The previous game was a massive globetrotting adventure, and by globetrotting I really do mean that. You got to go all over the world, and see some fantastic set pieces and great level design, in a wide variety of locations, including space. The story, although not perfect, was surprisingly well delivered, very well written, you met some interesting characters and you were constantly surprised by the places where the game took you next. The question I asked myself, before starting to play the game, is: “Can Old Blood live up to that?”. It is a $20, stand-alone prequel, made with limited resources, and I am very pleased to say that in some ways it really does, but it is not nearly as good as the original game which it was based on.

The Old Blood is a rather stealthy game when compared to other first-person shooters. More often than not, you will find yourself sneaking through rooms and looking for ways to power down those annoying hulking mechs. You also get to use your silenced pistols in order to take out unsuspecting sentries without making too much noise. On top of that, you are presented with a pipe, that you can use as a weapon, or as a tool for opening doors, or for climbing up walls. These scenes keep the tension high because you can die in mere seconds if you get spotted. There are numerous checkpoints across the game’s eight chapters, but I had to repeat some sections, where I stayed hidden for more than 10 minutes and I got caught out just as I was reaching my goal. It was very frustrating, but the game was fun enough that I immediately gave it another shoot.

During your playthrough, if you keep your eyes open, you will find some Bethesda Easter eggs. I managed to see the Nuka Cola machine from Fallout 3 and Skyrim’s Dragonborn helmet. I am sure that there a more of these secrets scattered throughout the game, but these two are the only ones that I saw with my own eye. A colleague of mine said that he also encountered a pixilated version of the rocket launcher from Quake 3. 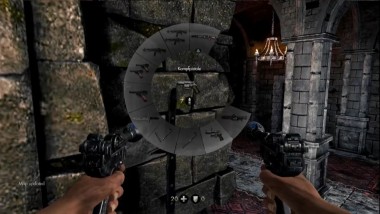 As I said before, you will have to sneak a lot in this game, but most of the time, you will have to go out guns blazing, in a traditional FPS manner. The levels are rather large and very satisfying, while the weapons are well designed and balanced. You have to know which weapon to use on which type of enemy, while managing the ammo (you will run out of it very fast if you are not careful) and running from cover to cover. The guns fell very good, but they don’t do anything unique. You have your typical assault rifles, shotguns and snipers that act exactly as they should, without surprising you in any way.

The most frustrating feature of the game is the fact that you have to hit a button every time you want to pick something up. The New Order had the same problem and instead of fixing it in The Old Blood, they throw at you even larger piles of items. It is fine on the PC version, where I’m rather used to this from other games, but on the PS4 I got very tired from hitting the same button over and over again.

Apart from that, I only have one more issue with The Old Blood, the bizarre way in which the game shifts from killing Nazis to killing zombies. The new enemies are not interesting either. They are just bullet sponge versions of the same enemies that I’ve encountered throughout the game, they are not scary, nor are they intimidating. Because of this, the excitement and strategy definitely takes a hit in the last three chapters, but the action dose a very good job of carrying the game until the end.

The Old Blood is a fun, short first-person shooter that relies more on its intense combat, but sacrifices the quiet moments that made The New Order such a great title. There is a lot more action, blood and guts throughout The Old Blood, but it has less heart.

If you did not play the original game from 2014, then I strongly recommend you play this one first. It will introduce you to the story in a very nice way and, more important, you will appreciate The New Order even more.