PvE Scenarios are essentially short instances for a few players.

PvE Scenarios will be staged experiences.

EXAMPLE 1: The Defense of Goldshire 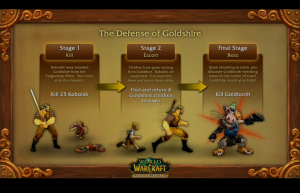 Stage 1 – Kill
Kobolds have invaded goldshire from the fargodeep mine. You must stop the invasion. Kill 25 kobolds.

Stage 2- Escort
Children have gone missing from Goldshire. Kobols are suspected. You must find them and return them safely.  Find and return 4 goldshire children to town.

Final Stage – Boss
Upon returning to town you discover Goldtooth wrecking havoc in the center of town. Goldshire needs your help! Kill Goldtooth!

EXAMPLE 2: The Battle of Grizzly Gulch (kinda looks like DOTA!) 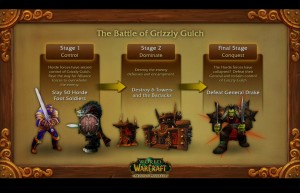 Destroy the enemy defenses and encampment.  Destroy 6 towers and the barracks.

Some other examples include PvE style battlegrounds.  There will be no player collision.  These scenarios could essentially replace group quests.

Scenarios will be queue and go, like the dungeon finder.  There will be no role requirements, so short queues.

This will be one of many ways to earn valor points.