The WoW Token is a new in-game item that will allow players to securely exchange between them game time and gold. Gamers will also be able to buy these tokens at the in-game shop in exchange for real life currency and then sell them at the auction house for gold. The tokens bought via the auction house will become Soulbound and players will be able to redeem them for an extra 30 days of game time.

One important thing you should know is that there will be no bidding on this item, only the “buyout” option will be available. In my opinion this is a great way to give their subscribers another solution to cover the cost of their subscription as well as provide a legit method of buying in-game gold. 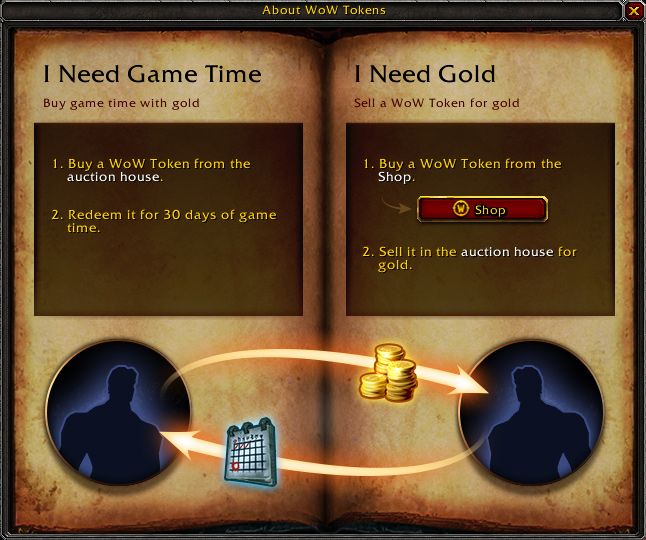 Blizzard just recently announced that they have started testing the “Wow token” on their private testing realm (PTR).  They said that they will be releasing the Token after the 6.1.2. patch that went live yesterday on the 24th of March. The initial plan was to launch them at the same time as the patch but they renounced that idea, considering that the feature will work a lot better on a more solid foundation.

They said that the World of Warcraft Token will be rolled out  in the next few weeks, first in the Americas region that includes servers in North America, Latin America and Oceania. After that they will expand to the rest of the world. They also announced that launching this feature in a single region will provide them with vital information before the worldwide release.

A good thing to know is that every game region will have their own exchange rate. Players in America will be able to acquire the Token for $20 while the ones in other regions will be able to buy them, using local currency, roughly at the same price. They said that more pricing information will be released as they get closer to launch.

After you buy a Token the only way to exchange it for gold is by placing it at the auction house. For that, Blizzard added a new tab called “Game Time” with the release of the 6.1.2. patch, that will stay dormant until the WoW Token launches in your specific region. While the auction house will remain locked on a single realm, the Game Time tab will be available for every subscriber in that region regardless of the realm they play on, giving the seller the largest pool possible of prospective buyers.

Blizzard will be setting the starting gold price for the WoW Token themselves. They stated that there will be several factors that will influence that price for every specific region, including regional in-game economies, but that their objective is to give players a reasonable initial price. After that, the cost will depend, just like every other item in the game, on the supply and demand. For example, if more Tokens are being listed than bought, then the price will normally go down over time. Do not worry, once a Token is sold, the player will receive the gold amount that they asked for when they initially created the auction, without being influenced by the current market price.

I hope that you guys are just as excited about the WoW Token as I am. This feature will maybe stop in-game illegal gold trades as well as put an end to those that constantly spam chat with their gold for real money offers.