Back in June, we told you why Star Wars Battlefront is an absolute must buy (but don’t preorder)! Well, we recently had the chance to play around with the beta. Here are our first impressions: Star Wars Battlefront beta exposed the game’s biggest flaw – the fact that it doesn’t have a single-player campaign. If you just want to jump in for some mindless fun, then the Star Wars Battlefront multiplayer counter-part would more than suffice.

It’s a little bit hard to justify the $60 price-tag considering that it doesn’t have a story element, but then again it’s EA we are talking about.

Moving further, the Star Wars Battlefront beta was amazing. At least for the Imperial Forces. The Rebels seemed to get beaten time and again, with only a few matches that highlighted their true potential. That’s what I experienced, and hopefully the end-product will do The Rebels justice. 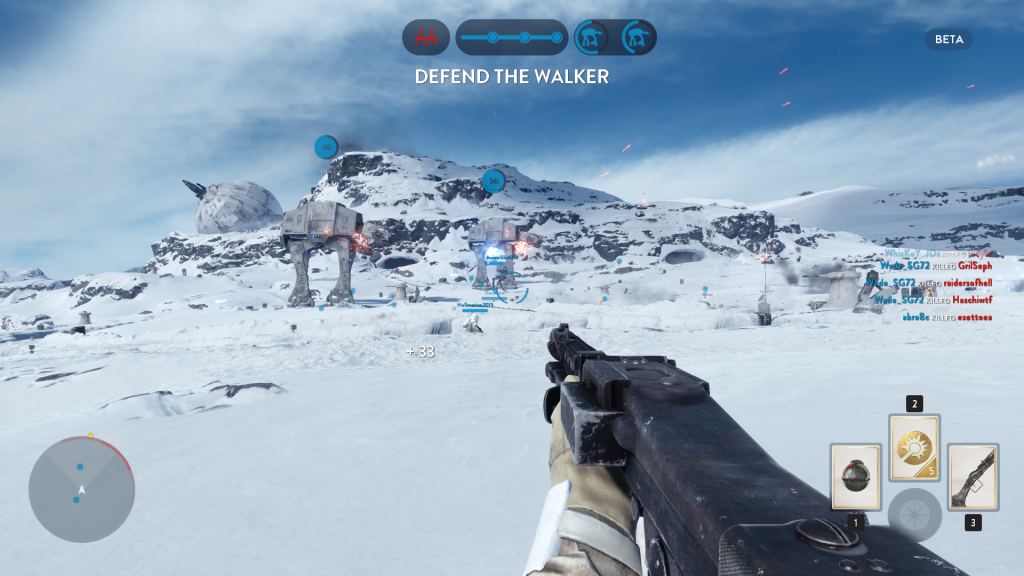 The bottom line is that everything goes pew-pew. At times it’s an awesome feeling, but if you’re stuck with team members that just want to grow their individual kill counter, then you’ll have somewhat of a lackluster experience.

Objectives are often completely ignored and this makes me ponder if I should cancel my pre-order right now and wait to see if there’s going to be a dedicated community or just gamers that want to shoot things up in a Star Wars medium. Don’t get me wrong, I got nothing against old-school fun. To be frank, the Star Wars Battlefront beta showcased that you can bring the 2000s gaming style back in HD, but with a twist. 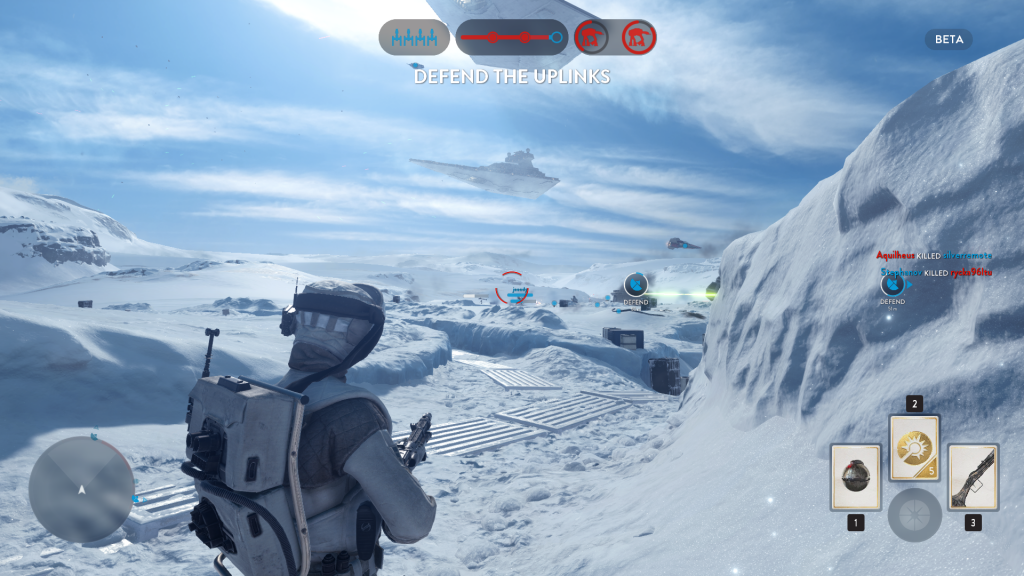 Visually it’s a geek heaven, and it’s everything that a Star Wars fan has ever wanted. Terrain is delish and maps are meticulously constructed to fit the original scenario. In our case, Hoth is just God damn beautiful – a true testament to the Star Wars saga.

However, game mechanics while rather enjoyable, fall short. Partially because the game is over-hyped at this moment, and because you don’t have to look far enough to see its Battlefield origins. While being much faster and a lot more arcadey than its big brother, it doesn’t really bring anything new to the medium. You have instant respawn – mainly because you can die after a couple of shots; battles consist of two small waves of players fighting for key positions, and vehicles can either be completely over-powered or vulnerable to the tiniest enemy.

It’s quite easy for newcomers and it has intuitive controls. Unfortunately, I’m ashamed to say that I just didn’t figure out how to pop into the third-person perspective from the get-go – my excuse is that I was too immersed in activating uplinks, or recapturing key positions to actually care from what perspective I’m playing.

Regardless, first-person was quite the experience for me – despite the consensus of third-person offering a more broad point of view, I was more than happy with my  choice.

Coming back to gameplay – you’ll notice that you don’t have any classes, nor squads. Each player can select his own role by either equipping himself with whatever weapon he wants, and special cool-down enabled powers. 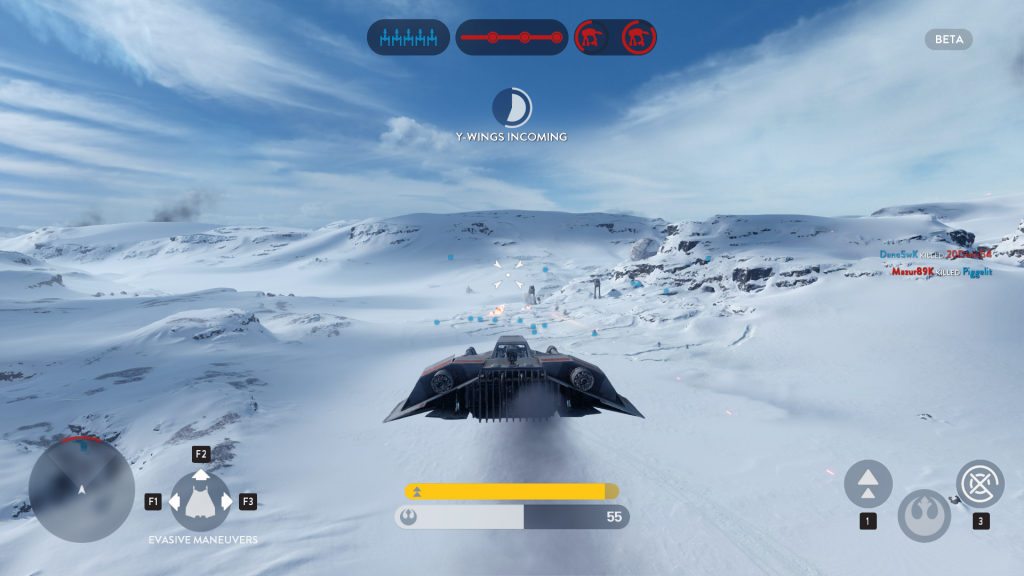 I really hate the flying mechanism so I usually bring it down right in the middle of a huge group of enemies.

The fact that it will most likely have a huge user base lessens my anxiety a little bit. I was meeting death more often than I care to admit, and thinking that I won’t meet constant blood-thirsty, but skilled, psychopaths makes the twitchy sensation in my left eye feel quite manageable.

The ground shakes with explosions, and when an AT-AT’s humongous steel foot clams against the terrain it will make the snow rise in a small cloud near it. Suddenly, a wild Darth Vader appears to battle a Return-of-the-Jedi era Luke Skywalker. The demented Vader strikes the eager to prove himself Luke to the ground. It seems like the Sith won this battle. But what’s this? Luke’s body stuck in mid air? Well… 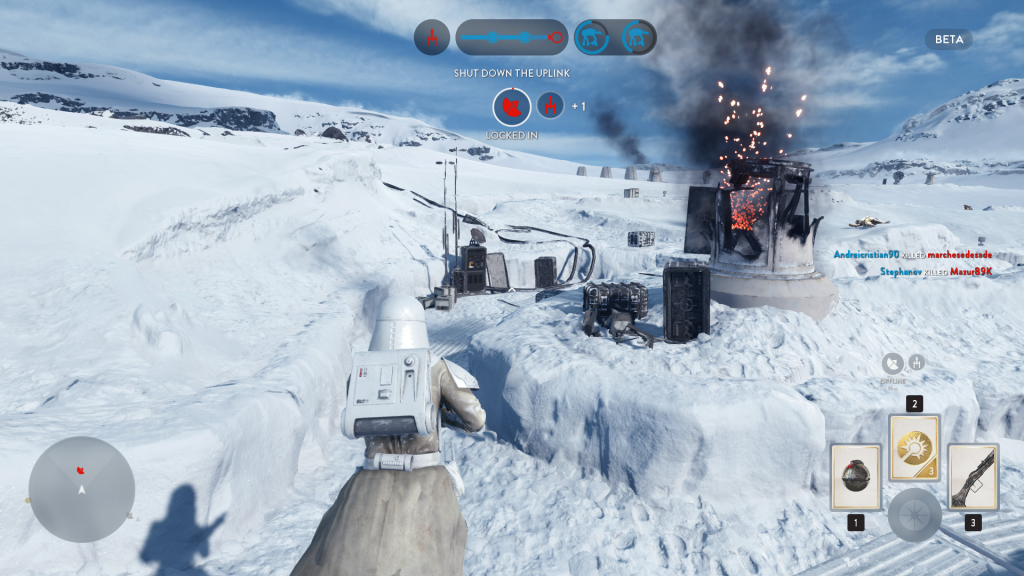 Nobody cares about objectives. If you’re aware of their existence, you should try to do your job.

The beta showcased some nasty bugs regarding clipping and full-blown floating corpses. Yet, it’s just the beta. We really  hope that these bugs will be fixed when the time for launch will be nigh.

The bottom line is that I enjoyed the Star Wars Battlefront Beta. I’m still sticking to my pre-order, probably. But regardless, I’ll play it this Christmas more than anything else.

However, as much as I enjoyed it, I really do hope that EA doesn’t screw this up with a plethora of pay-to-play DLCs. But, for a game publisher that received the award for the Worst Company in America two years in a row, nothing coming from EA will shock me. 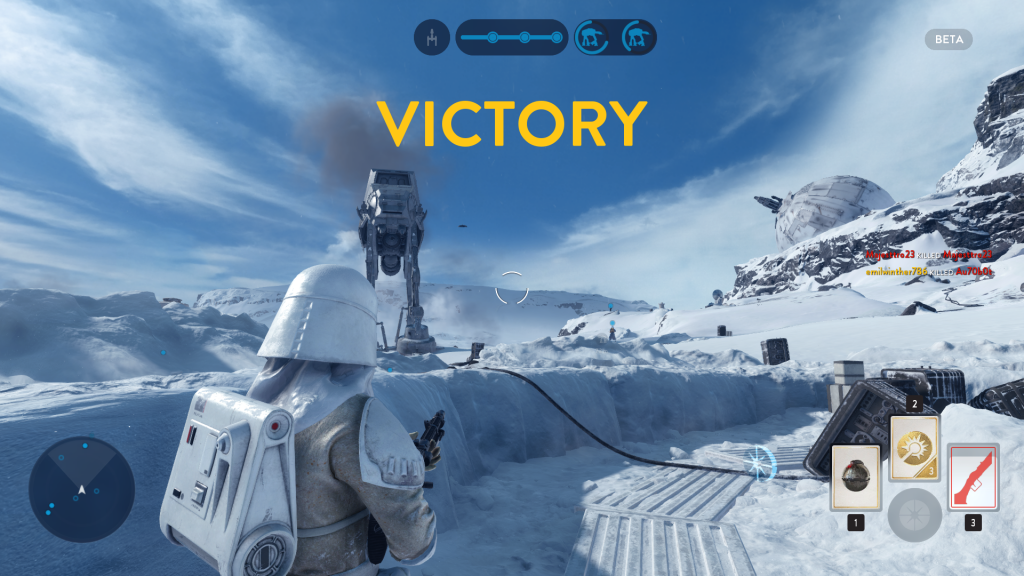 The Dark Side has won!

Still, it’s worth noting that EA will offer a free DLC a few weeks after the game’s launch to bridge the story of Battlefront with the upcoming Star Wars movie.

Star Wars Battlefront will be available for PC, PS4 and Xbox One starting with the 17th of November 2015.