Even though we enjoy an indie and non-mainstream game just as much as the next geek in our community, we have to confess we’re very much in love with Blizzard’s topmost creation, World of Warcraft. The game is so popular that it would be safe to say it became a mainstream cultural phenomenon, but it would still not do it the justice we think it deserves. We’ve been amazed with the game’s capacity to reinvent itself over the years, and now yet another marvelous expansion set is about to be released: the Warlords of Draneor expansion, set to come out on November 13th 2014, which is just a few weeks away. 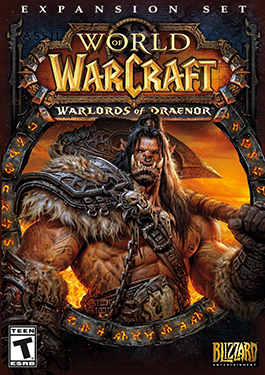 The Warlords of Draenor cover.

After Mists of Pandaria, World of Warcraft’s previous expansion, some players complained that even though the game was exciting to play and the new monk class and the new territories were definitely nice changes to the game, Pandaria wasn’t really an important part of the game’s lore and didn’t feel significant enough to make it that exciting. Now, with the new Warlords of Draenor expansion, this complain shouldn’t be ever heard again in the near future: if Draenor isn’t central to the game world’s history and timeline of significant events, then we don’t know what is.

Draenor, also known as Outland in the game’s present timeline, is the original home of the orc race (and the past home of the draenei), as it was introduced in Warcraft II. It is the place where Durotan, Thrall’s father, left from, in search of a better life for his family and his people, in the move which ultimately brought the orcs to the future Durotar (named by Thrall after his father). Without Draenor and Durotan’s initiative and his descendants, the current Wow world wouldn’t exist as we know it. And now, an external force is attempting to change something in Draenor’s past, which ultimately poses a threat to the present world as well. During the events which Warlords of Draenor will bring, the player must venture back in time to the age of the legendary orcs to try and set things right.

What Changes with Warlords of Draenor Bring?

In terms of more concrete, game-play related changes, these are the things we’re most excited about:

–          More opportunities to play together with people from a different server;

–          A new raid difficulty called Mythic, for those of us truly passionate about perfect coordination and looting the finest-level spoils which Warlords of Draenor will have to offer;

–          The opportunity for each player to build his or her own garrison in Draenor, to populate it with helpful NPCs (Non-Player Characters) and to build and upgrade it in order to help the player in their quests or crafting plans;

–          The new and improved look of the world itself, of the new armor sets and of some of the playable races (those released within the previous Cataclysm expansion): we don’t know about you but we here at Game Guide World are quite amazed at how rich and expressive WOW characters are becoming over time;

–          Last, but not least, any new expansion makes it easier for players to score some of the old achievements, as levels and items progress. Not fair, but very fun, especially for little achievement collectors!

What do you think about the upcoming Warlords of Draenor expansion, if you’re an active WOW player or at least a fan of the game? Are you as excited about it as we are or so you think the previous expansions were better? Let us know what you think in the comment section below, we’d love to heat from you.