Battle: Los Angeles starts right in the heat of battle after a sequence of comic-style narrations that tell the backstory to what brought us to this point in the game; the alien invasion.  These narrations appear throughout the game in place of cinematic’s and also to segway between chapters.  You start with just an assault rifle which is rather weak in terms of firepower.  I started on the hardest of difficulty but even on easier difficulties I rarely found myself using the assault rifle when I had the choice.  Shortly into the first chapter you have the ability to pick up a sniper rifle, which is without a doubt the stronger weapon.  The sniper rifle kills any alien in just one hit, on any difficulty.  While it does have an annoyingly slow reload in between each shot, it still beats out the weak firepower of the rifle.  The only other weapon in the game is a rocket launcher you get to shoot down aerial vehicles the aliens try to throw at you.  You are also equipped with grenades but it’s rare they will actually be used due to their weak overall power.  Obtaining ammo in the game is simply done by standing on a golden ammo create placed conveniently throughout the game.  To be honest, the only time I used grenades were during events that I could stand right on an ammo crate behind some sort of cover and just chuck grenades at aliens as they spawned. 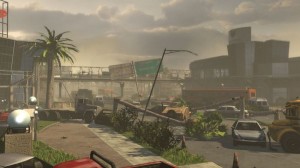 The gameplay itself is a very basic arcade style shooter.  Even on the hardest difficulty I did not experience any truly difficult gunfights, and honestly felt as though there should have been some sort of scoring system for kills or how fast you complete chapters.  I played through the entire game three times–you have to beat it on Hard, Medium, and Easy to get each of the difficulty trophies, as hard doesn’t complete it for the others–in just 2.5 to 3 hours.  Each time it felt more like I was playing to see how long it would take me to beat it, not whether or not I even would beat it.  By my third playthrough I had created my own fun by seeing how many aliens I could successfully no scope with the sniper rifle.

Graphically the game seemed a bit outdated.  Shading and textures were rather basic and explosion effects and animations seemed somewhat out of place and took away from any realism.  A majority of the game takes place outdoors in a sandy palm tree laden Los Angeles, except for a sequence that takes you underground into a sewer.  While the graphics themselves were overall bland, there was some very exciting and immersive animations throughout the game.  For example, early in the game you see a large airplane get shot down above you as it descends into the ground in the distance.  Every time a moment like that occurred it helped jumpstart the experience of the game.  One tedious graphical bug I encountered was the fact that some textures didn’t seem to load properly.  Periodically I’d find bright green or pink objects and textures that simply hadn’t rendered.  The rendering engine in the game is also slow by default and takes quite a while to actually render objects; many objects appear blurry while rendering and on the easier difficulties you’re normally done with that area and onto the next before the textures even load. 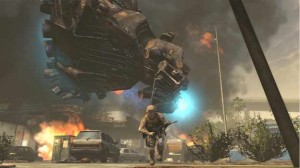 The music and sounds of Battle: Los Angeles were rather basic as well, but they worked.  The music tried to be intense at times but would awkwardly change at seemingly pointless moments.  Another bug I encountered was that sometimes when the music would be changing, all sound effects and music would simply stop for a couple of seconds.  This included the sound of firing your weapon as well as narration.  It was completely silent.  I encountered this several times throughout each playthrough so I don’t think it’s a rare bug.

Overall, Battle: Los Angeles was incredibly short, and very subpar.  Perhaps the most fun I found in the game was playing through it three times simply to get all of the trophies.  While it’s hard to recommend the game to anyone due to it’s mediocre gameplay and extremely short length, I will say this: You experience the entire story of the movie in this game, in an obviously more interactive experience than the movie.  Movie ticket prices these days are upwards around $10 per person, which is the exact same price point as this game.  If Battle: Los Angeles interests you at all I’d say to purchase the game and play through it rather than seeing the movie.  It’s the same exact story, and can be replayed as much as you want.  Plus as I mentioned before, it’s easy trophies! 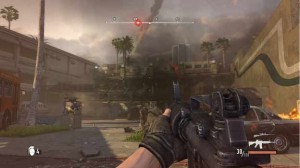