Castlevania: Harmony of Despair is the third release in the Xbox Live Summer of Arcade 2010 series and it brings franchise favorite characters together in a multiplayer romp against the infamous Dracula. But is this the cooperative whiplashing action you’ve been waiting for?

In a perfect world, each and every gamer would be able to create their own “dream game”. It would be a game full of self-tailored fan service. Chock full of favorite characters, awesome music, and fantastic  level design. For me, Castlevania: Harmony of Despair should have been one of those games. However, the latest “Metroidvania” entry in the vampire slaying series has some serious issues land it somewhere between a dream and a nightmare. 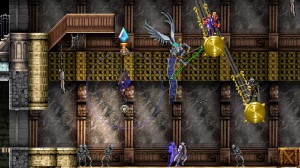 One of the biggest flaws that plagues Castlevania: HD is almost everything that has to do with menus.  Navigation of the UI, from equipping your character to the matchmaking, is downright nasty. A convoluted mess of submenus buried in menus. Even after playing the game for hours and hours, you may still find yourself fumbling around trying to get to the menu you wanted. Then, once you’ve finally made your way into one of the paltry six levels of the game (which, for some unknown reason, are timed to not exceed thirty minutes of gameplay), you will find that you cannot equip any gained weapons, armor, or items unless at the designated areas. Considering the entire game is based on progression via loot instead of traditional RPG leveling, it’s maddening that you can’t tweak your characters on the fly. The whole experience can just be one big unintuitive mess. 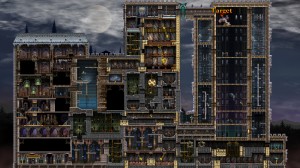 Now, unless you have played the Castlevania games that each character stems from, chances are you will have no idea what abilities are unique to them. For example, in the Nintendo DS game Castlevania: Order of Ecclesia, you assume the role of Shanoa, a sexy vampire slayer with the ability to absorb magical glyphs from enemies. She can then use these glyphs to imitate said enemies’ abilities. How do you do this? By pressing the “up” button on the directional pad, of course! And you can most certainly do this in Castlevania: HD, but here is the catch: Konami kind of assumes that you should just know what you’re doing and makes no mention of how it works in Castlevania: HD. So, as you use one of the five available whippersnappers (get it?) to try your luck at besting Dracula and his macabre crew, you will just have to figure them out as you go. God speed! 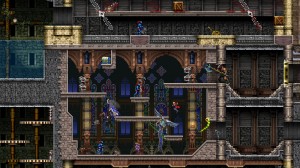 While you get a knack for your preferred character, you’ll also be faced with another challenge the game throws at you: the brutal difficulty. It’s that breed of difficult that Castlevania games have always had, but with some extra hindrances. For example, when you or one of your teammates kicks the proverbial bucket, you’ll be turned into a skeleton whose only offense is throwing a bone to cause minimal damage. At that point, your comrades can either revive you with one of the few rejuvenation potions that are found on the map, or you can be slaughtered again and again in your skeletal form. This causes the already ticking (and totally unnecessary) clock to lose five minutes per death! That’s just a type of unnecessary cruelty that I can’t get down with. 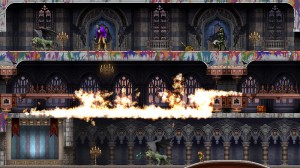 Let’s get down to brass tack, though. When going it alone, the experience is too unforgiving and has a tendency to feel slow and laborious. It’s like an uphill trek to the peak of molasses mountain. And what is your reward at the top? A delicious looking candy that tastes worse and worse the more you eat it. That being said, Castlevania: HD is a game that is inherently better with friends. Suddenly the metaphoric candy gets a bit sweeter. The monotony of the “start level, kill stuff, get loot, fight boss” formula and the brutality of the baddies somehow magically becomes a bearable and, believe it or not, fun experience. Suddenly, storming the castle feels like a much faster paced and more empowering experience. As far as I’m concerned, it’s the only way to play the game. Playing with three or four friends allows you to be slightly more reckless and carefree and without the looming fear of some overpowered Frankenstein’s monster crushing you into a fine dust. You better wait for all your buddies to start the game though, because once you get going there is no hopping in on the action. In 2010 Konami didn’t find it necessary to be able to let people join mid-game. 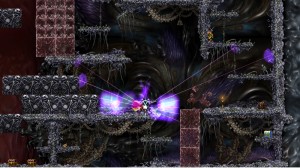 I’d also like to quickly direct your attention to the ability to play in the games included Versus mode. Yes, it’s there. No, you shouldn’t bother. The Versus mode seems like it was shoehorned in and just ends up being a boring game of who kills the other guy first…

So, what have we learned about Castlevania: Harmony of Despair today? Well, for one, it’s a cumbersome mess of a game that makes you hate menus and makes you feel inferior in skill, but in some bizarre way, the game is enhanced only by adding more players to the mix. Considering the relatively strong distaste I immediately had for Castlevania: HD, I’m pretty baffled and, as a Castlevania fan, relieved that I ended up having some fun with the game. At least enough to last a few play-throughs.