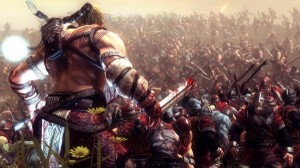 Sussex-based strategy captains The Creative Assembly aren’t just making strategy games these days, no sir, they are also making some action-led games. One of these was their 2008 hack ‘n’ slash console game Viking: Battle for Asgard, which is now headed for Steam. SEGA studio Hardlight tweeted the news, revealing that the game will appear on PCs next week. It will apparently receive a graphical overhaul for PC, which is probably for the best.