I never personally got around to even play any of the Deus Ex games in the past, and being a first-person shooter guy in many respects (plus a role-playing gamer as well) led me to give the series’ latest entry a spin on my 360 for awhile.  Now that I have, though, all I can say is that Square Enix and the guys at Eidos Montreal deserve a hefty load of respect for turning out a pleasing FPS-plus-role-player experience that’s part Halo, part Gears of War and part Terminator in various capacities.

Deus Ex: Human Revolution dumps you into the skin of Adam Jensen, the chief of security at bio-tech company Sarif Industries in the midst of a technological revolution in which everyone from athletes to counter-operatives is able to benefit from mechanical and neural augmentations of various types, often on a regular basis. Problem is, some folks would prefer a more natural human evolution, leading to violent protests and raids on augmentation clinics on a regular basis, among other plans of attack. Unfortunately, Adam gets stuck in the middle of just such a raid (and at his company’s HQ at that) in which several of his colleagues are killed (and his own life nearly gets taken as well). The end result is the use of augmentation to save Adam’s back end, which makes the fight for answers even more important than just for working security at a bio-tech lab. 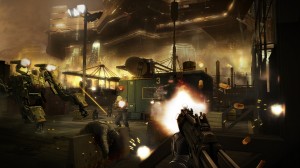 Without spoiling any more of the plot line, I’ll just say that getting done with this job (or a whole series of jobs as the story plays out, to be more specific) takes a load of twists and turns just to get to the final conclusion. You’ll have to deal with potential hostage rescue situations, auto-detonating wall mines, hacking through IT security, and even deciding at one point on whether or not to sacrifice a close associate for the sake of progressing through the story in a total life-or-death situation. You’ll even have to save your own boss from a tricky predicament at one point in the game, if you so choose. 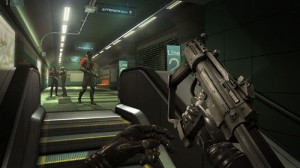 The combat system in Deus Ex: Human Revolution is relatively intuitive, though I would have preferred that controller options weren’t limited to a single layout definition – no southpaw option to be found here, and no old-school controller setting either. You’ll just have to suffice with left-stick walk/strafe and right-stick aiming to get through the game – still possible of course, but some players just might be put off by this kind of oversight. That said, anyone with history playing modern FPS games like Halo and Call of Duty should be able to jump right in and get to work in no time. 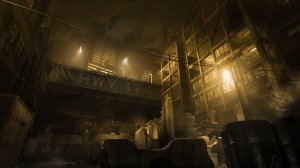 Visuals and interface elements are relatively well-designed, giving you a close look at essentials like remaining ammo counts, HP status (which uses the regenerative life conventions popularized by Halo and other recent shooters), energy reserves (also somewhat regenerative), your radar location system and so forth. On-screen effects like those from certain consumables (especially the somewhat-expected effect of drinking from a booze can) and from in-game events (such as the HUD-gone-haywire effect you get just before the “game over” screen if you end up KIA) are relatively well-done in their own right. Weapon switching can be done either through a quick switch menu comparable to similar functionality in an upcoming game for a certain other console, or through a standard inventory screen accessible from yet another menu screen that also provides you with functions like electronic data attainment history, facility/region maps, augmentation activation/upgrades and other useful information. 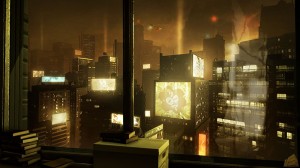 Decision-making plays an integral role in Deus Ex: Human Revolution. In addition to the life-or-death situations mentioned earlier (such as where you have to decide if it’s worth risking yourself to save a comrade) it’s also your call on how to deal with hostiles, innocents and officials alike. Letting that suspect go at the end of the manufacturing plant recovery mission has the consequence of losing a hostage (unless you kill him quickly in one optional approach or talk him into releasing the innocent woman he’s threatening) and you might also have to deal with him later on in the game as well. Effective negotiation with the desk guard at the local precinct office can save you from having to rip through a police force to get a much-needed information resource, as well. Same goes for possible side quests: you can choose to decline them, or be a total hundred-percentage nutcase just to get more background on the storyline or even just to help other NPCs. 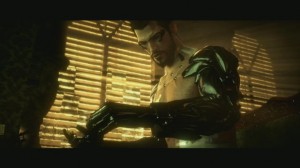 Sometimes you’ll have to get a little sneaky just to get through parts of the game, of course. Not every fight is worth it, so working quietly enough to slip by guards and security sensors can save you from a barrage of bullets every now and then; and in some cases, it’s much better to run than to shoot if the heat is really turned up. Robots and turrets are another story, however: you must either hack their controls or blow them to pieces with a perfectly-timed EMP grenade. Wall mines are yet another hazard, and one that must be set off in a chain by an object (or one or two at a time with a gunshot) in order to proceed at certain points without getting yourself blown to bits. 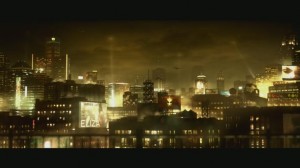 If things get really tough (or to get an extra benefit in certain situations) you can pick and choose from a multitude of augmentation upgrades to make the next task easier (and sometimes even less physically damaging) using any of the upgrade points that you earn from gaining one additional experience level (or from Praxis Kits that you can buy at L.I.M.B. Clinics, which also sell other items that may be useful in certain situations). You can also buy various weapon upgrades that can help out in tricky situations as well, in addition to being able to sell unnecessary gear when you need extra storage space for more powerful artillery that may be needed in certain situations. 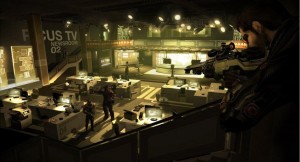 It will take several hours or days (based on your gaming habits) in order to finish the story (based on your gaming habits, of course) and while there’s no multiplayer involved (not even co-op) there are various additional hours that can be put in just to see every possible outcome for every individual situation, as well as four possible ending scenes. The entire truckload of trophies/achievements will also take several more hours or days to earn, which is best done across multiple playthroughs on all three difficulty levels. 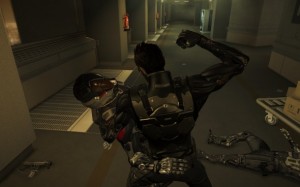 As far as an overall analysis goes, I was very pleased with the style, presentation and gameplay of Deus Ex: Human Revolution. The whole multitude of tasks, side quests and possible outcomes equates to hours of replay value, and the effects on how the story plays out will certainly leave you on edge just waiting to know what’s going to happen next. My only complaint is that it’s entirely possible – and that’s even when playing on the easiest difficulty level – to get overwhelmed by enemy forces and killed rather frequently in even the very earliest parts of the game, with very limited ammo to pick up for your weapons at even the very moments that you need it most (or even to leave yourself without any usable firepower upon progressing to a new location). Other than that, Deus Ex: Human Revolution is a hands-down, no-holds barred sci-fi action thriller, earning a definitive recommendation for even the most die-hard shooter fanboy out there.