As I sat down and put my Gears of War 3 disc into my XBox 360 I couldn’t help but reminisce about the past.  Nearly five years ago the original Gears of War launched, and to say it was a hit would be an understatement.  Some would argue that Gears of War even played a big role in turning the tide of the next generation war.  The series has without a doubt become one of the most critically acclaimed series to hit the industry.  As I stare at the Gears of War 3 title screen I can’t help to remind myself.  “This is it.  This is the end. ”  Has Epic Games ended their masterpiece with as much excitement as it started it with?  Find out in our exclusive Gears of War 3 review.

If you’re one of the few people who haven’t played the first two Gears of War titles–you better be picking them up and playing them first!–or even if you have and simply need a refresher, let me recap you on where the series has left off.  On an earth-like planet called Sera, two human organizations, the Coalition of Ordered Governments (COG) and the Union of Independent Republics (UIR) fought over an energy resource called imulsion for over 80 years.  This conflict went on to become The Pendulum Wars.  Then Emergence Day (or E-Day) occured.  With no apparent warning or motive, an unknown species of sentinent creatures, called the Locust Horde, appeared from underground caverns.  They attacks cities all across the world simultaneously, and a quarter of the world’s population is killed in the initial attack alone.  The prevalent organization, COG, took arms against this unprecedented invasion. 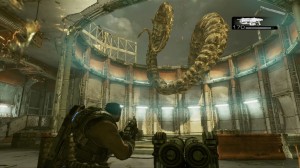 14 years after E-day, the playable character Marcus Fenix is released from prison to join in the battle.  Fenix was placed there for disobeying orders to find his father, Adam Fenix, a weapons physicist.  Unforutunately shortly after finding his father, the Locust attacked and his father seemed all but dead.  Following his fathers research notes Fenix is able to find massive underground tunnels the locusts use to get around.  COG detonates a “light mass bomb” in the tunnels, destroying many of their underground lair.  Unfortunately, just a few weeks later the Locust swarms were back and larger than ever.  The population of Sera was reduced from billions to just a handful, and their last safe haven–Jacinto–was next on the Locust hit list. 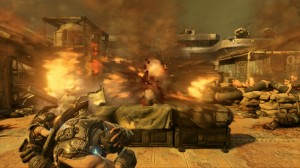 As a “dying breath” effort to counter the Locust, COG uses a powerful weapon called the Hammer of Dawn to sink Jacinto and drown the Locust forces swarming beneath it.  Those humans still alive build a new refuge on a remote volcanic island yet untouched by the Locust.  Luckily for them this island is home to Vectes, a former COG naval base which becomes their new home.  A year later a new form of enemy, Lambent, begin to sprout up and surround Vectes.  The Lambent are an evolved lifeform from the Locust, when touched by the liquid resource on Sera called Imulsion.  The Lambent are enemy to both human and Locust.  Fenix receives information his thought-dead father is actually still alive, and Gears of War 3 begins. 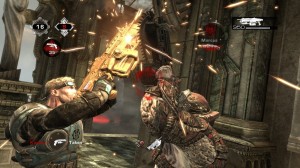 In cooperation with Epic Games and Microsoft’s requests to make our coverage spoiler free, I will not say much about the story in Gears of War 3, but what I will say is this: It’s epic.  Overall, as Cliff Bleszinski promised, most major (and even minor) questions regarding the game,  the characters, Sera, and the history of the world (and its future) are answered with this conclusion to the trilogy.  Science Fiction author Karen Traviss was behind the story for Gears of War 3, and I’m glad.  She is after all the author of four of the Gears of War novels (soon to be five) and definitely knows her stuff.  I don’t think this trilogy could have ended any better than it did.  After completing the game I felt a bit of sadness that the trilogy is over, but at the same time the feeling of fulfillment.  I came along for the ride during the invasion of Sera, and it was a hell of a ride.  Even though I didn’t think the story could get any deeper and more involved than Gears of War 2, but it certainly did. 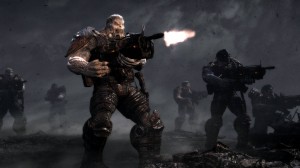 Thankfully a majority of the core gameplay elements of the Gears of War series has stayed intact.  While the controls and overall elements are for the most part the same, they seemed to flow even smoother and feel more immersive.  Not far into the game you’re introduced to a new feature, the Silverback.  The Silverback is a controllable mech suit, which to put it simply kicks ass.  While in the Silverback you have two operating modes: the first is assault mode, operating like a normal character, just in a mech.  In this mode your Silverback is equipped with a high-damage machine gun.  In its other mode, stationary mode, the Silverback becomes immobile but deploys bonus armor to aide in defense for the Silverback as well as a rocket launcher that packs a pretty mean punch. 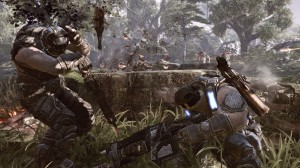 In Gears of War 3, while most of the game you play as Marcus Fenix, there are several times in which you control other characters of Fenix’s squad.  It’s refreshing to play as other characters but every time I came back to Marcus Fenix I felt like I was “at home again”.  The game has introduced a plethora of new Locust enemies as well as tons of new Lambent enemies.  There’s also a handful of new weapons to defend Sera with.  Some of these weapons include a sawed-off shotgun, incendiary grenades, a powerful sniper rifle called the “One Shot” which does just that: kills enemies in one shot.  The Vulcan is a cool new weapon that requires two people to operate.  One person operates the actual gun while the other operates and feeds the ammo.  Another cool weapon is the Digger Launcher that launches digging creatures through the ground at fast speeds, causing them to explode on impact.

An awesome new feature for the game is four-player co-op.  Though I haven’t been able to try it out yet (I don’t have any friends with the game, but check back after launch as I will definitely try it out and leave my thoughts here!), it definitely seems promising!  The game also features an enhanced progression system allowing players to gain experience in all game modes including the campaign.  The max level from this progression system is in fact 100. 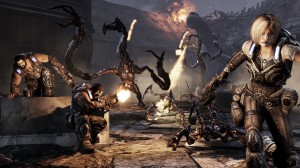 Unfortunately as of right now, I’ve yet to be able to truly test the multiplayer.  The matchmaking system keeps placing me with bots (I’m not surprised, as the game hasn’t actually launched yet), but there are plenty of additions to multiplayer.  A new mode, called Beast Mode, is similar to Gears of Wars 2‘s Horde mode.  In Beast mode, the player attacks AI COG members, playing as as Locust creatures.  You earn tokens by killing the COG members, allowing you to upgrade to a stronger class of Locust.  This is a very fun sounding mode and I can’t wait to try it out!  Another big change is the previous Horde mode has returned, with enough changes to dub the name “Horde 2.0”.  Horde 2.0 is a much more strategic variant of the mode.  Players choose a Command Post and earn cash from kills to build defenses around it including fences, turrets, mechs, and much more.  Every tenth wave also features a boss from the actual campaign.  The mode seems to somehow be even more enjoyable than it was in the past, and I can’t wait to try this mode out as well! 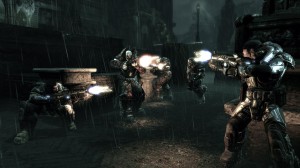 Graphically, Gears of War 3 looks better than ever.  Still using Unreal Engine 3.5 (not surprisingly: the engine is owned by Epic Games after all), everything looks polished and crisp from the liquid effects to the explosion animations and environmental animations.  I don’t know what they changed exactly, but while Gears of War 2 already looked pretty damn good, Gears of War 3 simply looks even better.  Going hand in hand with the visuals is another immersive function, the music.  I love how Gears of War knows just when to play crazy heart-pumping music that puts me in a Locust bloodcrazy, and when to play serious or emotional music after a defeat or depressing plot point in the game.  I felt for these characters and the people of Sera as if I have known them my all whole life, and I wanted to be right there fighting with them. 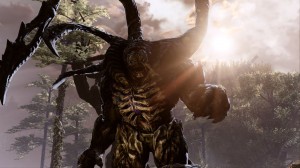 Those of you that have been waiting for the end of the trilogy, it was well worth the wait.  Gears of War 3 is an epic conclusion to an epic trilogy.  This is the type of conclusion all series’ should strive to achieve.  It’s very rare that I say this about a game, especially one in the seemingly saturated shooter genre, but I need no second thought to say it.  Gears of War 3 is one of the best games this year, if not of all time.  They definitely did things right to ensure Gears of War fans that the final installment in this trilogy would be what the fans deserve.  If you’re even considering  picking of Gears of War 3 (or considering to consider it!),  definitely do.  Gears of War 3 is a game that needs to be in every gamers library.  It’s been a long yet exciting run fellow Gears.  I only wish it wasn’t really over.

Note: This review is based almost entirely on the single player and campaign of Gears of War 3 and strived to be 100% spoiler free.  For more detailed coverage on the full story of the game as well as the multiplayer features and functionality, please check out our second coverage shortly after the game launches on September 20th.