I’m Commander Shepard and this is one of my favorite games in the galaxy! 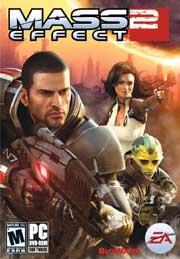 In 2007 when Bioware released the first game in their space opera trilogy, I was floored. Sure it had a few technical issues and design choices that I wasn’t incredibly fond of, but the game had the makings of the perfect Science Fiction experience. Fantastic locations, an amazing story, an extremely deep and rich lore, and so on and so forth. Everything about the game begged for my attention and always had me coming back for more. Bioware really had a task at hand on following up on such an impressive piece of work. And they did so amazingly.

Mass Effect 2 once again puts you in the Geth stomping shoes of Commander John Shepard as you, humanities last hope, continue the fight against an ancient genocidal race known as the Reapers. However, since most of the galaxy still refuses to acknowledge that the Reapers are anything more than a mere myth, Shepard has to make nice with one of the only available allies, the infamous human supremacy group, Cerberus. 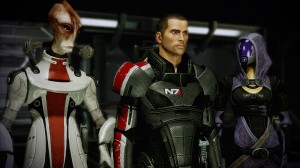 As the opening sequence of Mass Effect 2 began and the camera swept through the command deck of the S.S.V. Normandy, the first thing I noticed was the game’s absolute beauty. ME2 is a special kind of good looking that started to make my fiancee jealous when I wouldn’t shut up about it: the dark specs of Shepard’s perpetual five o’clock shadow, the glistening textures of the rugged N7 armor, the disgusting wrinkles in the reptilian faces of the Krogans, and Miranda’s… assets. Every detail seems to be crafted to the finest degree. Many times, I even found myself distracted from the game in exchange for star gazing into the infinite black of the universe, or patrolling a beach to scope out the local foliage. If looks could kill, Mass Effect 2 is a mass murderer. Once I finally snapped out of lust and moved on from the visual quality, and a fantastic addition to video game’s greatest introduction sequences, I started to see what Bioware had done to improve upon their first entry in an already solid series.

I loved the first Mass Effect because it had everything I wanted from a sci-fi story along with the RPG mechanics of games that I tend to salivate over. So, when I found out that some of those more in depth role-playing elements had been more or less stripped from ME2, I was a little ticked. I found myself staring at menus with less attributes to build per character and a relative absence of armor and weapons. For a developer that gave us RPG legend, Knights of the Old Republic, I felt vaguely betrayed by the change. Soon I realized it was all for the better. Instead of having the tedious task of sorting through piles of firearms and armor and reducing the less enticing excess baggage into omni-gel, ME2 presents you with fewer, but better inventory options that you can be upgraded via research to pack more punch (more on that later). It actually makes for an infinitely less cluttered and less headache inducing UI. Initially, it was difficult to discern which weapon or armor I would use since they don’t have stats per say, but more so descriptions that indicate their strengths and weaknesses.

You’ll find some accessories throughout the shops of the universe that do have an actual numerical value tacked on to them (plus 25% headshot damage on a visor, for example), but that’s about the most number crunching you’ll do. You’ll never have that overwhelming feeling from Mass Effect 1’s inventory system and cramped menus that made you say, “Why do I have so much S**T?!” ME2’s more minimalist approach to inventory is all to the game’s advantage. It helped to keep me engaged and playing rather than how ME1’s menus made me like a full time warehouse manager in an extremely cramped storage facility. 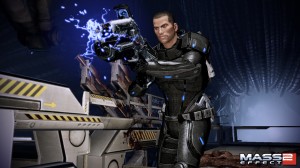 In another effort to make Mass Effect 2 a much more streamlined experience, Bioware really focused on giving players the most out of the story that they could. To do this, much like the inventory, a fair amount of unnecessary exploration has been dumped. Most of Shepard and Company’s travels will actually stick to the planets and systems that really matter. You’ll no longer be landing on every random local, storming through identical facilities over and over again for side mission tidbits and marginally better equipment.

Now, there are still plenty of optional missions for you to take on, and you can still explore every nook and cranny of each location you set foot on, but it’s just limited to those specific locations that Bioware wants you to see. In fact, any extraneous exploration that ME2 has is offered in the form of mining. Like ME1, you can read up on many of the planets in the multiple solar systems and survey them for minerals, but this time around you will manually scan the planets and send out probes to collect the goods. These minerals and elements can then be used to upgrade and enhance anything from assault rifle damage to adding medical bay enhancements to your ship. While the mining can feel like a sluggish and unnecessary endeavor, I will say that my “collect everything” OCD definitely got the best of me as surveyed the living hell out of every planet in sight. Finding a sweet spot full of Mass Effect’s fabled and ubiquitous Element Zero always feels like a miniature Christmas. If it’s not your cup of tea, mining is a strictly optional way to make RPG fans happy by upgrading and enhancing, while the trigger happy shooter fans can skip it altogether and continue blasting Batarians with bullets and biotic superpowers. Really, the lack of freedom and exploration in ME2 isn’t a gripe of mine at all. In fact, I never really noticed because I was so busy pushing forward to find out who I was going to meet next or what I was going up against. 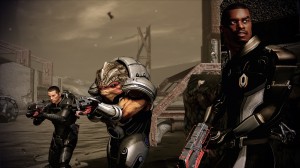 The most pivotal part of the Mass Effect 2 experience is also it’s deepest, richest portion of the game. The absolute wealth of information, story, dialogue, and character development that Bioware was able to jam into the experience is nothing short of magnificent. Simply opening up the games expansive codex proves just how massive the universe Bioware built is. It base of information is constructed upon the codex entries from ME1, but the fact that they were able to add seemingly countless amounts of entries to further deepen the lore of these finely crafted species and locations never ceases to amaze me. It’s quite literally like flipping through an encyclopedia that only has awesome information about space (the only other encyclopedia I could ever ask for would be about dinosaurs, and Krogans and Salarians are close, so it’s kind of a win-win situation.) As if the codex entries weren’t enough, Bioware has proved that their writers love what they do by crafting some of the most relatable and engaging characters.

While of course gameplay and graphics are extremely important in almost all modern video games, it would be a lie if I told you that storytelling wasn’t my primary priority. Bioware nailed this with ME2. In most RPGs, after spending enough time talking to NPCs, I find myself glossing over, hoping to get the small amount of information I need so I can finally move onward. Such is not the case with ME2. I’m pretty sure I tried to hit every single dialogue option possible just to hear what would be said and how it was said. Every Human, Asari, and Elcor you come across in the game seems to not only have their own unique personality, but also a sense of self that most other game’s main characters could only dream of having. Because of this ability to create such believable and gripping individuals, Bioware was able to make me care about each and every character in the game with a passion. Especially when it came to the main crew of the experience. I wanted to know everything possible about everyone in my troop. I questioned the mysterious assassin, Thane, about his personal demons and afflictions, I with Jacob about his daddy issues and why he joined Cerberus and I wanted to learn about grunt and his brutal and maniacal behavior, but I was too scared he would at me… Mass Effect 2 is such a smart and phenomenally written and acted game that too much was never enough. So, if you want all of this dialogue and story, it’s all there for you to take in and thoroughly enjoy. After I spent so much time with my crew, getting to know them, and using their abilities alongside Shepard in battle, I was legitimately enveloped in them and frightened that I may lose a member at any moment.

At this point, it goes with out saying that I love Mass Effect 2. It sits up high on a small list of games that will forever be in my gaming rotation. Bioware has truly outdone themselves with this amazing game and I sit here now, with bated breath, eagerly awaiting the third installment of what may become the best science fiction trilogy of all time.