When I was first approached about writing a review for Sine Mora I thought to myself “Oh great, this shouldn’t take long at all!  An XBLA scroller can’t have that much depth!” Boy was I wrong. Describing this game is no easy task.  It’s unlike other side scrolling shooters in the sense that it has a very immersive and intricate story.  It pulls you in, tries not to let go, and kicks some ass in the process.

At the start of Sine Mora you are briefed on the backstory so far.  While it is a bit much to read all at once, it does offer great insight as to why you’re fighting and who you are fighting against. Before you know it, you find yourself thrown right into the middle of all the action.  As you would expect from any good arcade game, there is plenty of action to go around in every aspect; and the artwork across all avenues is amazing!  Right from the beginning of the game you can see the amount of time and effort that went into the little details we tend to overlook, especially when it comes to art. The scenery, the ships, the bosses: they all look amazing.

As the game progresses, you will run across some well thought out bosses and fights that while they aren’t incredibly challenging, there’s certainly enough challenge there to keep you on your toes. Oh and did I mention you can control time? The game features a unique time shift system that is pretty handing because there are plenty of times when you’ll find yourself needing to use those special time abilities.  Instead of having lives and/or other ships to rely on, it’s all based on your time of progression.  If you kill things you add time to the clock and if you get hit you loose a few seconds.  Trust me when I say, sometimes those few seconds can make or break whether or not you are successful; I learned that the hard way. 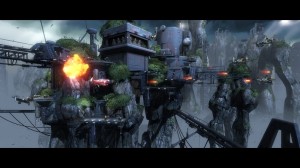 The one thing that I found a bit lacking were the voice-overs. I don’t really mind the fact that it’s in a language I don’t understand or recognize, but when they stop the action for a cut scene (yes, cut scenes inside scrolling shooter, and yes they managed to make it work) and I have to read subtitles and all of a sudden I have to shoot again, it becomes a bit tedious and frustrating.  Also, make sure you have time to sit down and play.  Despite being a side scrolling shooter, Sine Mora is definitely not a “oh I have 10 minutes so I’ll play a level or two” kind of game.  If you stop half way through the stage, expect to start from the beginning when you boot the game back up again, and the same can be said for the ‘game over’s; I wish the game was more forgiving with a checkpoint system.  At the same time, this added challenge can be seen as a positive as most games today don’t offer much of a penalty and allow on-the-fly game playing sessions. 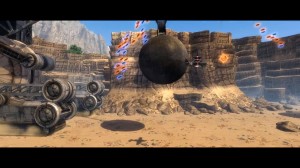 So in summary, Sine Mora is very fun and very pretty.  At times the scenery is so colorful and vibrant that you completely forget it’s an M rated game.  Is it challenging? Sometimes yes and sometimes no, but overall it has a balance of difficulty.  Does it have its quirks?  Certainly, but nothing major that can’t be overlooked; Especially if you’re a fan of arcade shooters.  If side scrolling shooters aren’t your cup of tea, chances are you already plan on skipping Sine Mora.  If this is your genre, however, I would certainly recommend checking it out. Just make sure to keep your eye on the clock and grab those power-ups.