Subnautica is a mash-up of different games that ought not to work. It’s an undersea exploration game, something that is rarely done well. It’s a survival game, something that’s gone out of style recently. Somehow, though, the combination of the two has managed to become something more than the sum of its parts. The purpose of this Subnautica review is to take a look at why the game works, from an overview of the storyline and game play to a hard look at the game’s pros and cons. 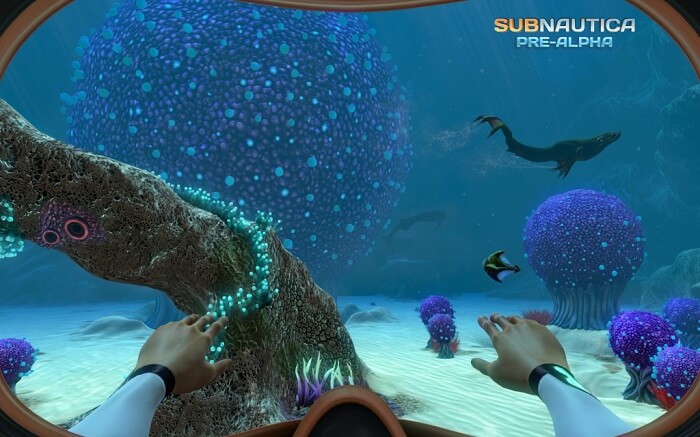 If you are going to assign Subnautica a genre, it’s probably survival. It’s a genre that has ranged wildly over the course of the last few years, encompassing family-friendly fare like Minecraft as well as more extreme games like Rust.

Subnautica Shifts the Survival Genre in a New Direction

Subnautica takes the genre in a different direction, though. The game isolates the player against an incredibly hostile terrain. This is a game that makes even the simple act of breathing something of a survival challenge, as it well should. After all, this is a game about surviving in the most alien atmosphere of all – the deep, dark ocean.

Simply put, Subnautica stands out because of its setting. This Subnautica review will consistently come back to how different the underwater setting makes this game feel, especially compared to its genre contemporaries. Games that place the player under the ocean have traditionally fallen prey to some major challenges. However, Subnautica has managed to become something all of its own.

Alien doesn’t always mean outer space. While Subnautica might start you off in a traditional sci-fi setting, it puts you in a place that’s far more alien than any purple-skied world.

It places you deep beneath an alien ocean, in a place where the usual rules of survival don’t quite count. The space around you is hostile, yet you must push forward. You’re not the first person to come here by a long shot. However, you may well be the first person to survive the experience.

That’s the story of Subnautica, a game that reveals its mysteries in short bursts. In this Subnautica review, we were at turns sure we knew where the game was going and totally baffled by what came next. This is a game like almost no other, one that will require you to use your brain and ignore most of what you’ve learned in other games.

This Subnautica review revealed a game that was almost as alien as its setting. In some ways, though, the alien nature of the game came from the fact that much of it was familiar. While we’re now used to exploring beautiful, alien worlds, we’re really not used to them trying to kill us literally every second. While meter management is a given in this type of game, throwing oxygen into the mix made it a totally different experience.

What really sets Subnautica apart from most of the survival genre is the fact that it has a real story. You’ll find yourself following a breadcrumb of trails across the ocean. Along your journey, you’ll build things to pass certain obstacles and improve your equipment in order to survive just a little bit longer. You will die from time to time, but it will more often be because of your ambition than because of the game’s world.

The Z-Axis Resets Your Sense of Direction

We found that the biggest challenge of this Subnautica review was the z-axis. Having three dimensions of movement isn’t something gamers are used to. We often found ourselves having to remember that things were above us. That plus the ever-ticking clock of our oxygen, made it impossible to forget that we were in an alien world.

Simply put, it was one of the best representations of being somewhere more different that there’s ever been put on the screen.