Back in 2007, SouthPeak Interactive released the original Two Worlds for PC and XBox 360.  The game was instantly compared with Bethesda Softworks’ The Elder Scrolls IV: Oblivion due to its real-time 3D fantasy landscape and non-linear gameplay. While SouthPeak had released several games before Two Worlds, none had aspired to be quite as much as Two Worlds.  Unfortunately, the game was hyped up by gamers to be the “Oblivion” killer, and nearly everyone had expected only perfection from the game.  While the game certainly had its flaws, compared to any other game of its type except for Oblivion, it was one of the best.  Overall Two Worlds received mostly “subpar” or average reviews (65 on Metacritic) due to lack of polish and some game-breaking bugs.  Over time SouthPeak patched Two Worlds into a much better experience, but the damage was already done.  Fast forward nearly three years later and SouthPeak has released the sequel, Two Worlds 2.  Is Two Worlds 2 an improvement over the original, or a twin brother with the same flaws?  Find out in our Two Worlds II Review. 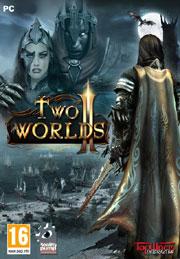 First off, sorry this review was late.  We had some issues getting our hands on a review copy (mostly our fault!), but here it is, better late than never!Upon receiving the game I put it in my PS3, with absolutely no expectations, started it up, and….wow!  Just wow.  Right from the start I can see vast improvements graphically.  I’m not sure what engine Two Worlds 2 runs on, but wow.  It’s simply beautiful right from the menu screen.  While Two Worlds wasn’t ugly, it definitely didn’t feel as next-generation as some of the games released around the same time as it.  Two Worlds 2 however is quite the opposite.  Even the lighting and reflections blow me away; the visuals in this game are on par with the rest.  Some of the animations are a bit off–some characters run awkwardly, especially many of the animals or non-humanoid creatures–but at least they look great doing it!  I can’t stress enough how unexpectedly beautiful the art is in this game though. 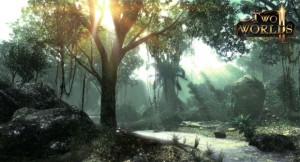 I had the opportunity to play Two Worlds 2 on both the PC and PS3.  Other than controls–which I will detail below–the game really doesn’t have any major differences.  The gameplay and story is of course the same, and graphically the difference wasn’t major enough to even warrant mentioning.  Now the controls, on the other hand, are more than worthy of note.  Let me start by saying this game was certainly made with a controller in mind.  I played the game originally on PS3, and had no huge complaints with the controls, from character movement, combat, and even interface controls; they were for the most part fluent and clean.  Apart from a few mapping control issues, the controls worked.  My only concern was the L1/R1 buttons.   Those buttons simply controlled too many things: sneaking, bow aiming, running, etc.   It definitely takes some getting used to.  On the PC however, I found myself hooking up my XBox 360 controller to play through the game.  I just couldn’t find a way to make the keyboard and mouse controls fluent enough to get into it.  It also felt like there was an increased delay time between my actions.

Having played through Two Worlds, I was pretty excited to jump into the story of Two Worlds 2.  The original game had a rather predictable story, and wasn’t really told that well.  It was pretty much a bread and butter story, and while it got the job done, I found myself wanting more.  In Two Worlds 2, I found the story to still be quite predictable, but the storytelling itself was much better.  Basically Two Worlds 2 takes place just after an enormous war between Humans and Orcs that ended in the Humans thinking the Orcs were extinct.  This wasn’t the case.  The overall atmosphere between these two factions are uneasy throughout the entire game; when there’s peace, it’s only when needed, but never wanted.  While this story itself wasn’t the main plot of the game (the main plot features your character’s journey to defeat the evil mage-king and save your captive sister who’s being exploited by said king), I still found it to be a immersive one. 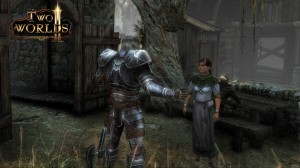 If there’s one thing about Two Worlds 2 that disappointed me, it would have to be the character development.  The character development in Two Worlds 2 saw no improvement over the original.  Not only do characters never really show true emotion in their dialogue, the voiceovers are simply horrid.  In the rare case there is emotion in a voiceover, it’s either overly dramatic, or not dramatic enough.  Emotion aside, the voice-work is still quite rough.  Some characters sound like English is a struggling language for them, and rarely did I feel myself actually listening rather than reading.  Despite the terrible voice-work however, the music shines through.  I found the music to often be exciting and fun, and never found myself turning it down–which I do often in games these days.  The fantasy-themed music actually added to the experience in most cases; as a matter of fact, I think I might ask SouthPeak how to go about acquiring the soundtrack for this game; it’s definitely top-notch! 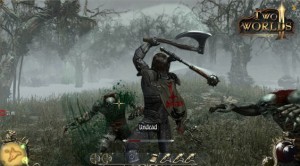 Multiplayer in Two Worlds was sort of clunky.  When it launched, it was extremely buggy–in fact at the start it didn’t even work–and overall simply not fun.  Thankfully, in Two Worlds 2, this is not the case.  Online players can duke it out in deathmatch-style combat and dueling, play through an entire separate multiplayer questline/campaign, and even a city-builder similar to White Knight Chronicles that allows players to build their own fantasy-style village using rewards obtained throughout their adventure.  Overall the multiplayer aspect of Two Worlds II is very cool and alone warrants trying out the game.  It’s almost similar to playing an MMORPG in its own aspect. 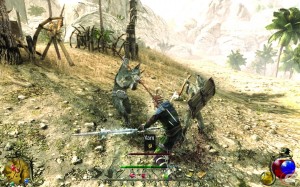 The Verdict: Let me save you some time; if you’re an RPG fan and have not done so yet, Two Worlds 2 is for you.  Furthermore, if you liked Two Worlds even a little bit; Two Worlds 2 is for you.  The game is greatly improved over the original.  The gameplay is fun, the graphics are breathtaking, and the multiplayer is probably the best yet from a non-MMO RPG game.  If you’re a fan of non-linear open-world progression, insanely fun and fulfilling exploration, or simply annihilating all types of enemies in an immersive and beautiful world, once again Two Worlds 2 is for you.  I’m confident than anyone who’s a fan in the genre will find Antaloor to be as much of a fantasy playground as I did, from beginning to end.  Now if you would excuse me, I have an epic village to build.