The Witcher 3: Hearts of Stone is CD Projekt RED’s first Witcher 3: Wild Hunt major expansion. It introduces new game mechanics and deadly bosses for Geralt to play with. One of the most powerful beasts is found underneath Oxenfurt, in the sewers.

The Toad Prince is a Lovecraftian nightmare that gobbles up everything that enters its domain. As soon as you step in its mucus-covered lair, you’ll feel a brooding sensation take over – is this the place where Geralt meets his death?

Definitely not, since we get to see him own real estate in Blood and Wine. Our hero will also spend the rest of his days as a retired Witcher with his chosen romance option, Triss or Yen.

The Toad Prince is a dangerous foe. Such a mischievous beast will relentlessly try to kill and devour Geralt. It’s one of the vilest and hardest fights in the game. Luckily, we’re here with a short Witcher 3 walkthrough to help you with your struggles when facing this vengeful foe.

The Witcher 3: Hearts of Stone Guide 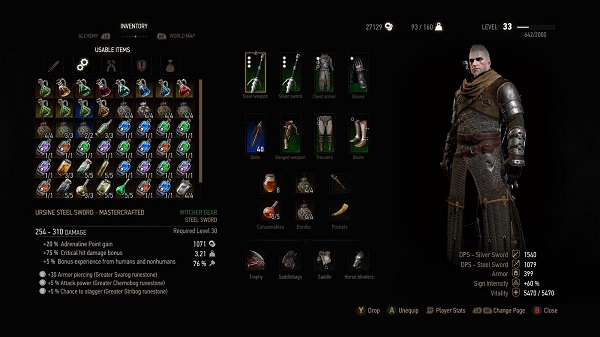 Before starting this Witcher 3 boss battle, you need to take a look at what weaknesses the Toad Prince has. The beast is vulnerable to Yrden, your magic trap ability. Golden Oriole will grant immunity to poisons. Therefore, it will effectively neutralize any that is already present in Geralt’s bloodstream.

Cursed Oil, Superior or not, is a must in Gerald’s dangerous adventure. That’s because it gives more attack power against Cursed Ones. Finally, you’ll require Northern Wind bombs as well.

Unfortunately, if you used a save file to boost you to level 32 so you can play Hearts of Stone, you won’t have these items at your disposal. Not having them still means that you can vanquish the Toad Prince. However, it will take a lot more time – and some skill on your behalf.

When the Toad Prince boss battle starts, you’ll find the frog king sitting at the center of the arena. The Toad Prince has four attacks you need to avoid – they depend on your position and strategy.

If you stand in front of the Toad Prince, he’ll either start to shoot his nasty tongue at you or fire small blobs of venom that you mustn’t step into. Be careful though, his tongue can pierce your Quen spell. Try to avoid it as often as you can. Otherwise, the beast will inflict a massive amount of damage and it will also stun Geralt. 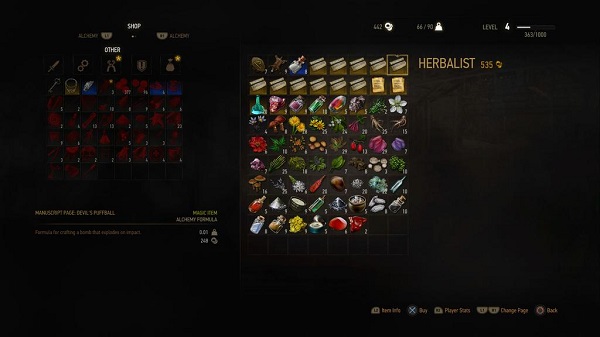 If you position yourself near the beast, then the Toad Prince will cast his tongue against you. This single move will also remove Quen from Geralt. On the other hand, it won’t do as much damage as before.

If Geralt is standing on the sides, trying to flank the Toad Prince, then the nightmare beast will fire up to 5 venomous blasts from its rear. In other cases, he only fires 3. These pools of poison should be avoided at all costs. You don’t need to use Cat to see them. They glow in the dark, but just slightly.

If Geralt stands very closely to the Toad Prince, then the frog will slightly jump in the air. This will strip Geralt of his Quen and do a ton of damage. It also stuns your character.

Now that you know how the Toad Prince can kill you, it’s time to effectively attack. Knowledge wins you half the battle. Therefore, let’s unravel the Witcher 3 walkthrough for this terrible beast. 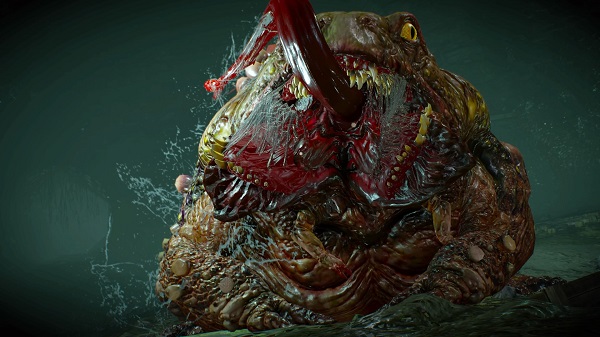 The main trick is to circle around the Toad Prince an inch closer with every lap. Throw your Northern Wind bombs every now and then – whenever you see a window, of course. These will do some damage and also freeze the target.

Eventually, you’ll end up next to the frog king. You can trick your enemy by keeping to its side. He will jump in the air several times so beware of his stun. Roll away when gravity kicks in and the toad comes clashing down. This way, you don’t get stunned or receive damage. Attack two times and back away. Rinse and repeat.

One of its main weak body areas is its cheeks. If you position yourself accordingly, near the beast’s cheeks, you can do some massive and continuous damage. If you manage to get to its rear, then you’ll be able to chug some pretty great HP off of the Toad Prince. However, doing so will make the monster jump across the arena. This means that you’ll need to reposition yourself by circling around the monster again.

During this boss battle, the Toad Prince will eventually set itself with its back against the wall. Under no circumstance should you approach it at this moment even though he looks defeated. Instead, go the farthest opposite direction and lure it back to the center of the lair. 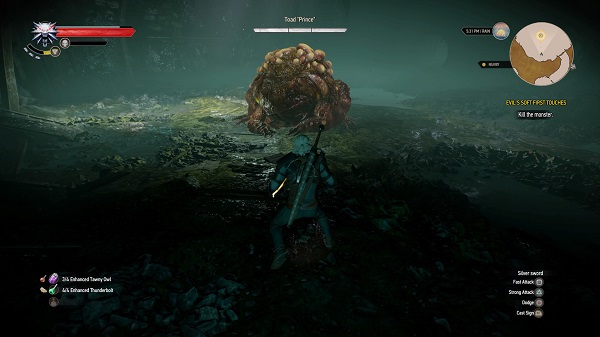 As its HP slowly dwindles, the monster will not change attack patterns. You just need to make sure you follow steps we discussed in this Witcher 3 walkthrough, and the beast will be no more.

It’s worth noting that you can employ any other bombs as well. On the other hand, I fancy Northern Winds more. Igni does about 2,000 burn damage. If you time it right – when his cheeks puff out; the fight will be over quicker. Moreover, Superior Golden Oriole will, in fact, make poison heal Geralt.

Did you manage to slay this fiend so far? How so? Tell us in the comment section below.